The Carbajal Valley near Ushuaia in Tierra del Fuego is an archipelago and a spur of the Andes, South America's most significant geographical feature.
Image: Andrew Shiva 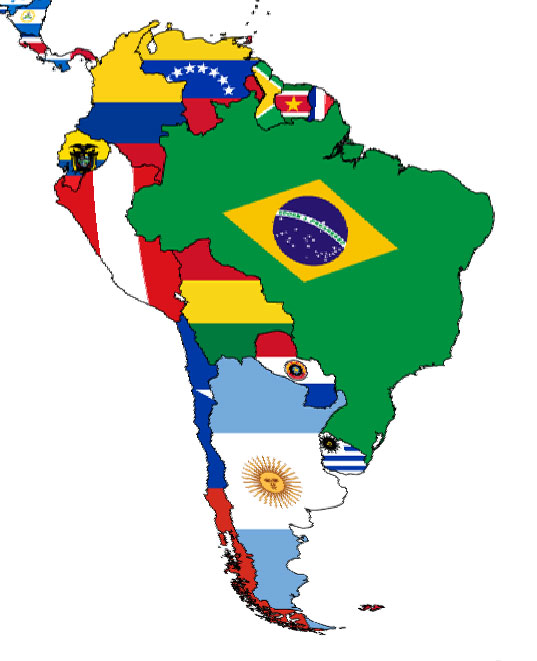 South America is a continent that comprises the southern half of the single landmass of the Americas.
It is connected to North America by the Isthmus of Panama.

The continent is located almost entirely in the Southern Hemisphere, bordered in the west by the Humboldt (Peru) Current of the Pacific Ocean, in the east by the Brazil Current of the Atlantic Ocean, and in the north by the Caribbean Sea. 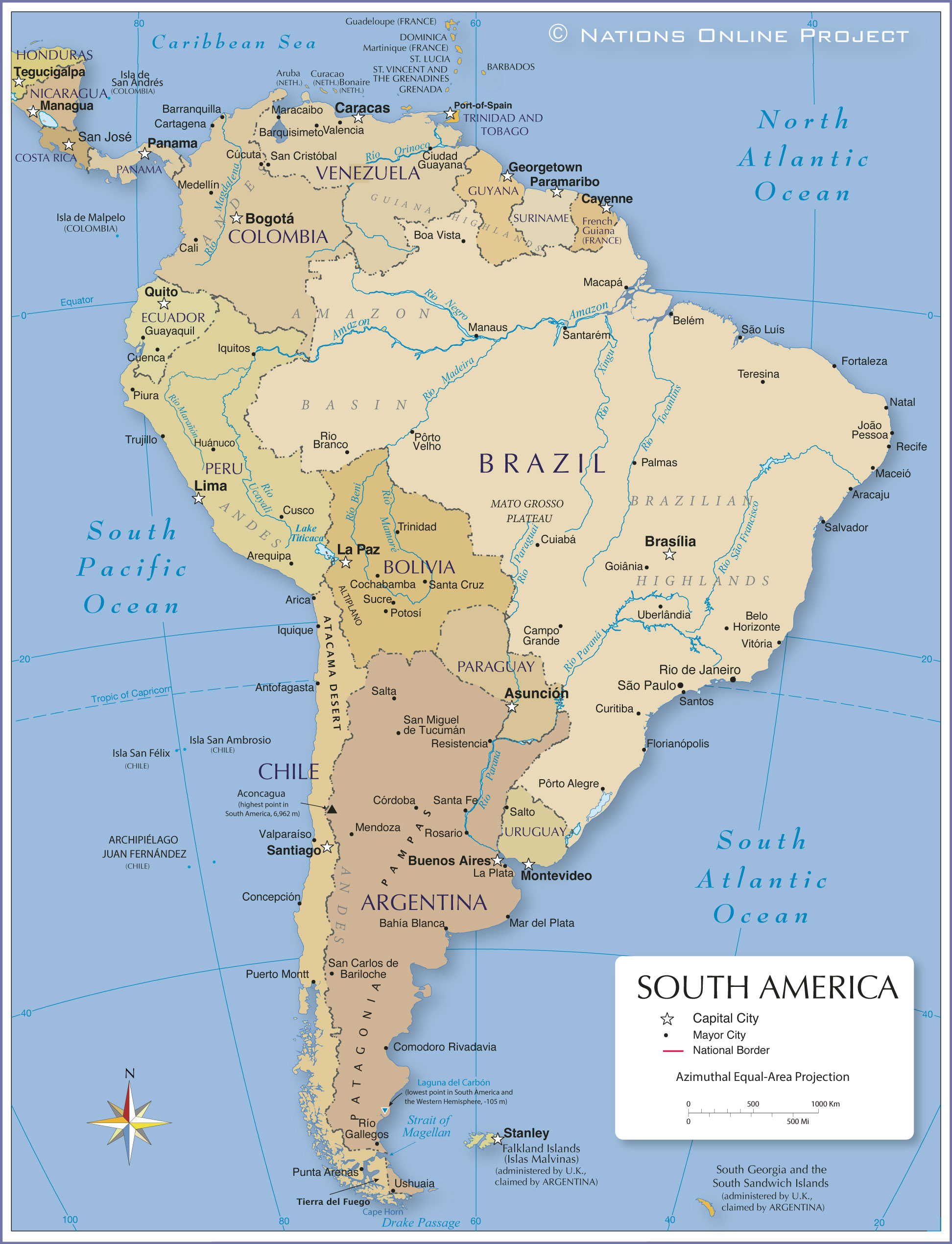 Topographic map of South America with annotations on the main geographical features. Clearly visible are the mountain ranges on the western edge of the continent that we know as the Andes Mountains. The map also shows the location of the Guyana Highlands, the Brazilian Highlands, the Espinhaço Mountains, the Amazon Basin and the Amazon River, the Altiplano, Patagonia, Tierra del Fuego, and the Strait of Magellan.
Image: Natural Earth, kk - nationsonline.org

Area
With an area of 17.8 million km², South America is number four on the short list of the largest continents.

Located on the South American mainland are 12 independent nations and one overseas region of France (French Guiana (Cayenne)).

The island state of Trinidad and Tobago (Port-of-Spain), just off the northeastern coast of Venezuela, consisting of two islands, is considered part of the Caribbean.


Population
South America has a population of about 434 million people (2022).

South America is part of Latin America, a large cultural region in the Americas where Romance languages, Spanish, Portuguese and French, are predominantly spoken.

List of the main physical regions of the South American continent. 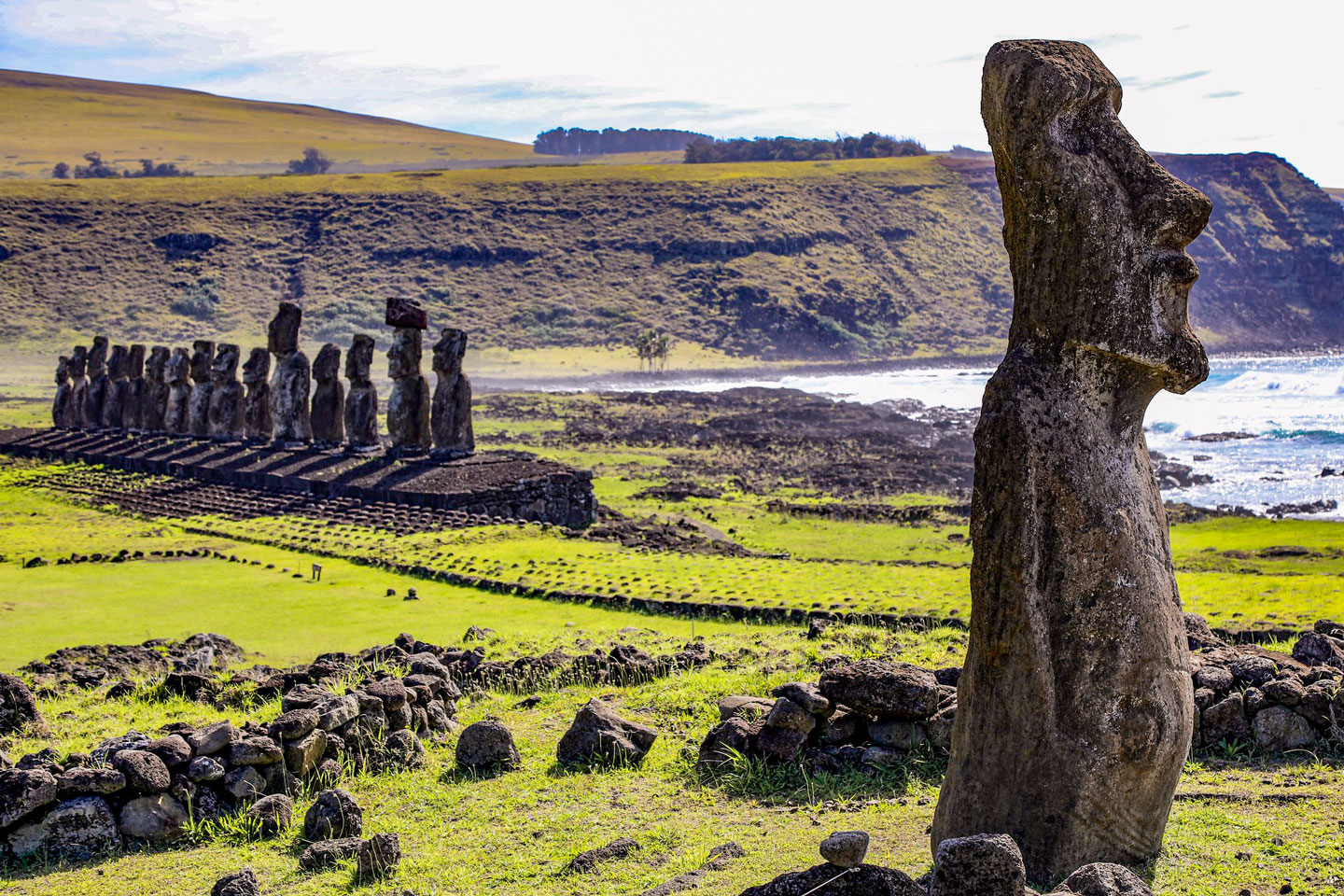 The Moai figures on the Easter Island (Rapa Nui) are monolithic human figures made by the Rapa Nui people between the mid-13th and 16th centuries.
Image: Wendi Halet


Islands
The continent includes the Falkland Islands, an archipelago of more than 100 islands in the South Atlantic Ocean, an overseas territory of the UK since January 1833, claimed by Argentina.


Easter Island (Isla de Pascua; Rapa Nui) is the easternmost island of Polynesia in the southeastern Pacific Ocean. The Chilean dependency lies more than 3,700 km (2,300 mi) west of the coast of Chile.
The island is famous for its nearly 900 monumental statues, the Moai, created by the islanders between the 13th and 16th centuries. 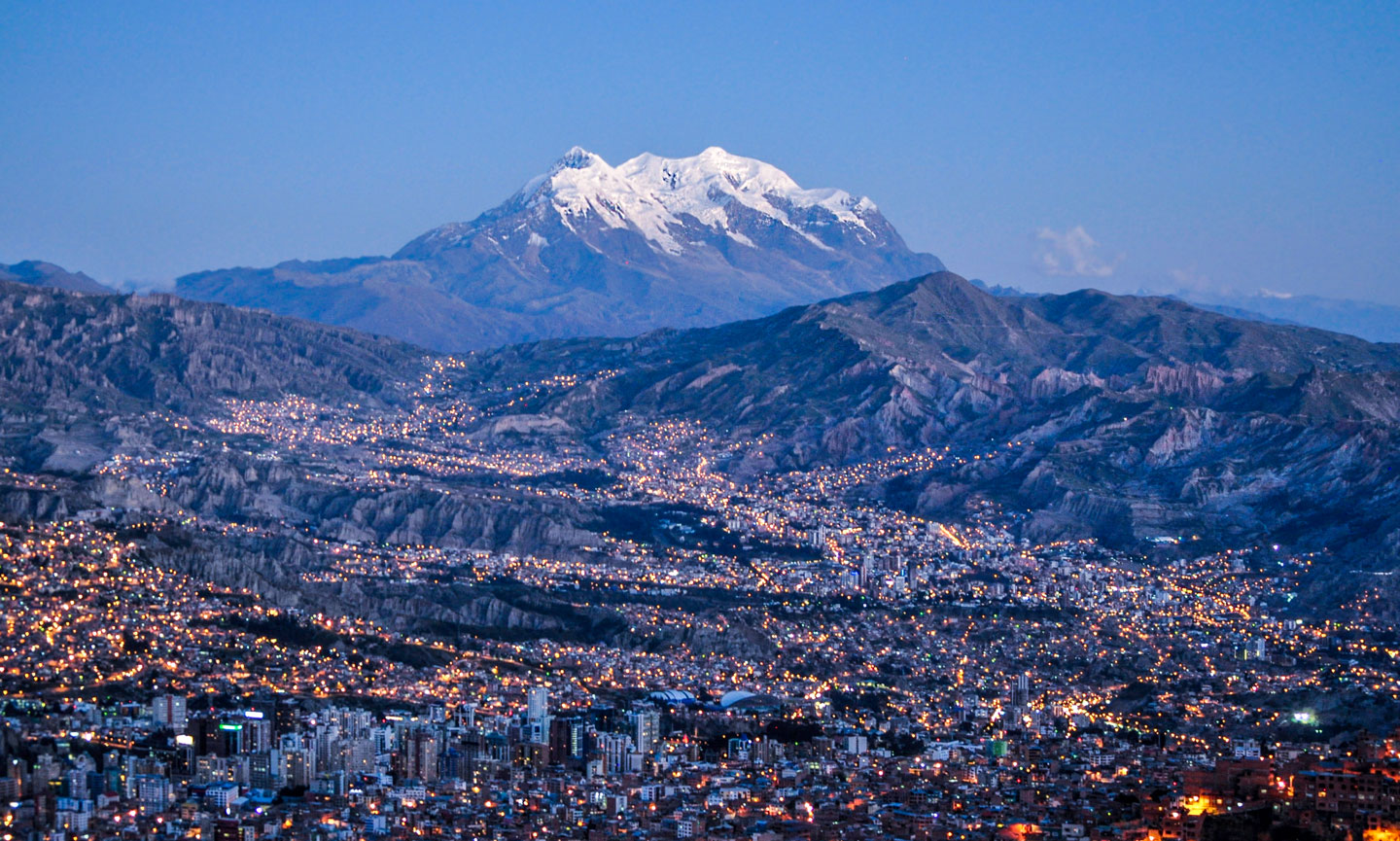 View of La Paz. Bolivia's third largest city and the seat of the country's government is located on the Altiplano. La Paz is the highest capital city in the world at 3,640 m. In the background, the 6,438 m (21,122 ft) high snow-covered Illimani Mountain, the highest mountain in the Cordillera Real, a subrange of the Andes.
Image: EEJCC


Mountains
The highest point in South America is Mount Aconcagua (6,962 m; 22,840 ft), located in the Andes Mountain Range in Argentina.

The Andes are a continental mountain range in western South America, the longest mountain range in the world. The various Cordilleras of the Andes stretch for more than 8,600 km along the continent's west coast, crossing seven countries.

The Andes were formed by plate tectonics, the collision of two crustal plates. The denser oceanic Nazca plate had pushed under the lighter continental South American plate and formed a subduction zone. In the process, the Nazca plate is pushed downward, creating a trench, and the continental crust of South America is pushed upward, creating the Andes mountain range.
The subduction zone is an area of intense volcanic activity; it forms the eastern section of the Pacific Ring of Fire. The subduction zone of South America is one of the world's most earthquake-prone regions. [USGS]


Altiplano
The Altiplano (High Plateau) is a high-altitude tableland in the Andes mountain range shared mainly between Peru and Bolivia, with some areas in Chile. The plateau lies at an average altitude of about 3,750 m (12,300 feet), grasses and shrubs dominate the landscape. The Altiplano is the site of Lake Titicaca and the Salar de Uyuni (see below). The Altiplano is also Bolivia's most densely populated region. La Paz, Bolivia's second-largest city and administrative capital, is located on the Altiplano. 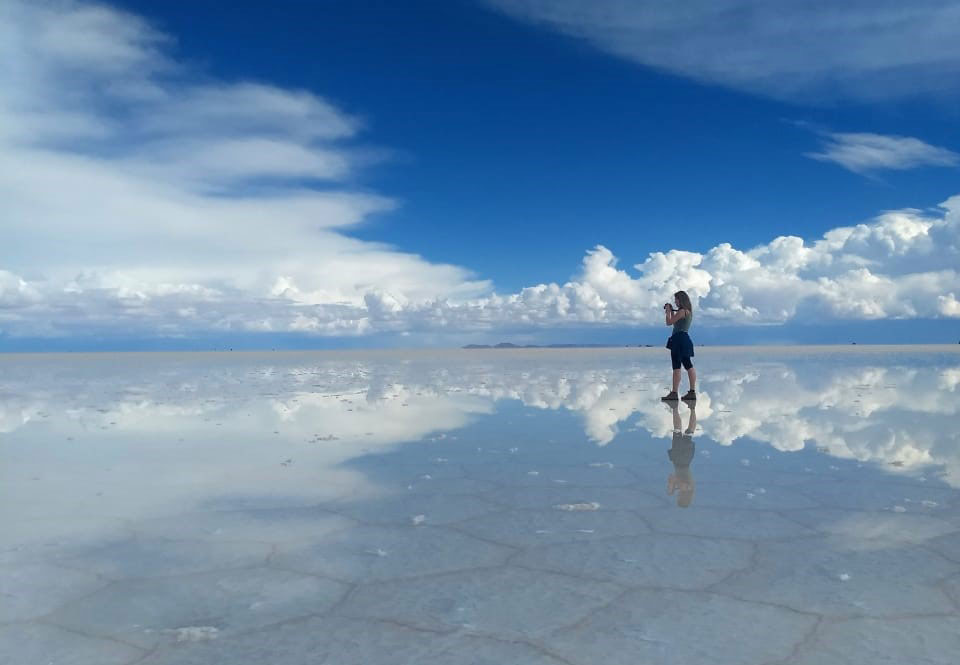 Reflection of the sky in the Salar de Uyuni. The world's largest salt flat is located in the southwest of Bolivia at an elevation of 3,656 m (11,995 ft). [NG]
Image: Jeferson Herbert


Gran Chaco
The Gran Chaco (Quechua: Hunting Land) in the interior of the South American continent is a rather sparsely populated subtropical semiarid alluvial lowland in western Paraguay and northern Argentina.


Llanos
The Llanos (Spanish: "Plains") are a vast tropical grassy plain east of the Andes Mountains in Colombia and Venezuela in northwestern South America.


Pantanal
The Pantanal is an extensive tropical seasonal wetland and savanna ecoregion at the headwaters of the Paraguay River in southwestern Brazil; it is the world's largest tropical wetland area.


Patagonia
Patagonia is a plateau in the southern part of South America; it covers a vast area from the Colorado River in central Argentina to the Strait of Magellan and from the eastern foothills of the Andes to the Atlantic coast.

Rivers
Major rivers are the Amazon River (Amazonas) with its tributaries Rio Madeira, Rio Negro, and Rio Xingu, Rio Magdalena, Rio Orinoco. The Amazon River is the largest river by discharge of water in the world.

The Tocantins River, São Francisco River, and Rio Paraná are not tributaries of the Amazon. 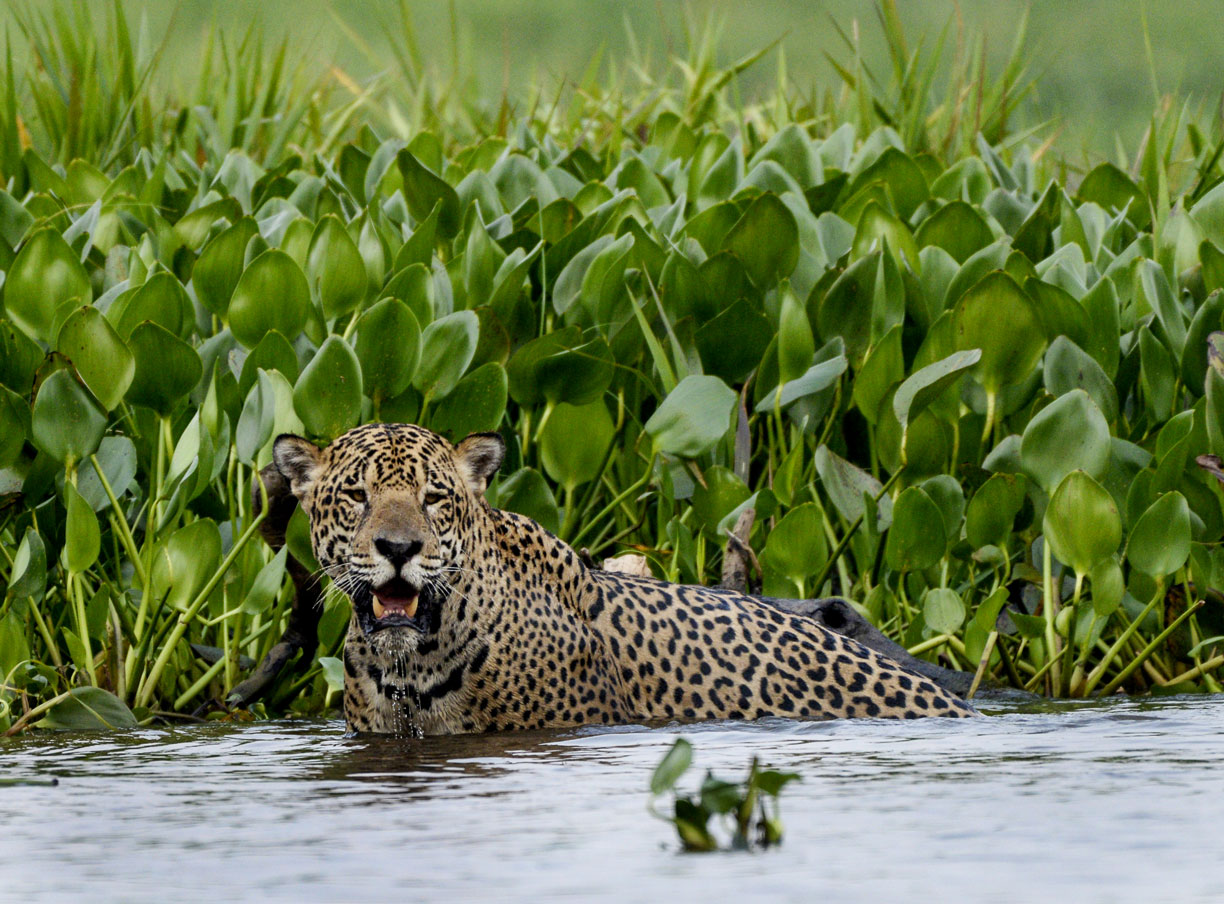 A jaguar in the northern Pantanal, the largest tropical wetland in the world, located mainly in the Brazilian state of Mato Grosso do Sul. Jaguars used to be found from the southwestern United States across South America to almost the far north of Argentina. Now they are virtually extinct in half of their historic range. [WWF]
Image: Jan Fleschmann


Lakes
Lake Maracaibo in western Venezuela is an inlet of the Caribbean Sea and the largest lake in South America.
Lake Titicaca in the Andes, on the border of Peru and Bolivia, is the continent's largest lake; it is also the highest navigable lake in the world at an altitude of 3,812 m (12,507 ft).

The highest point in South America is Aconcagua at 6,960.8 meters; it is the highest mountain in the Americas and the highest peak outside of Asia.

The lowest point of South America, at -105 m, is Laguna del Carbón, a salt lake in Santa Cruz province of Argentina.

The Amazon River is the largest river by water discharge and the second-longest river system in the world after the Nile.

Lake Titicaca, on the border of Peru and Bolivia, is the continent's largest lake; it is also the highest navigable lake in the world at 3,812 m (12,507 ft).


The extreme points of the South American mainland.

The northernmost point is at Punta Gallinas, a cape at the tip of the Guajira Peninsula in northern Colombia.

The westernmost point is at Punta Pariña, a cape in Piura Region in northwestern Peru.

The easternmost point is at Ponta do Seixas, also known as Cape Branco in Brazil's Paraíba state near its provincial capital João Pessoa. 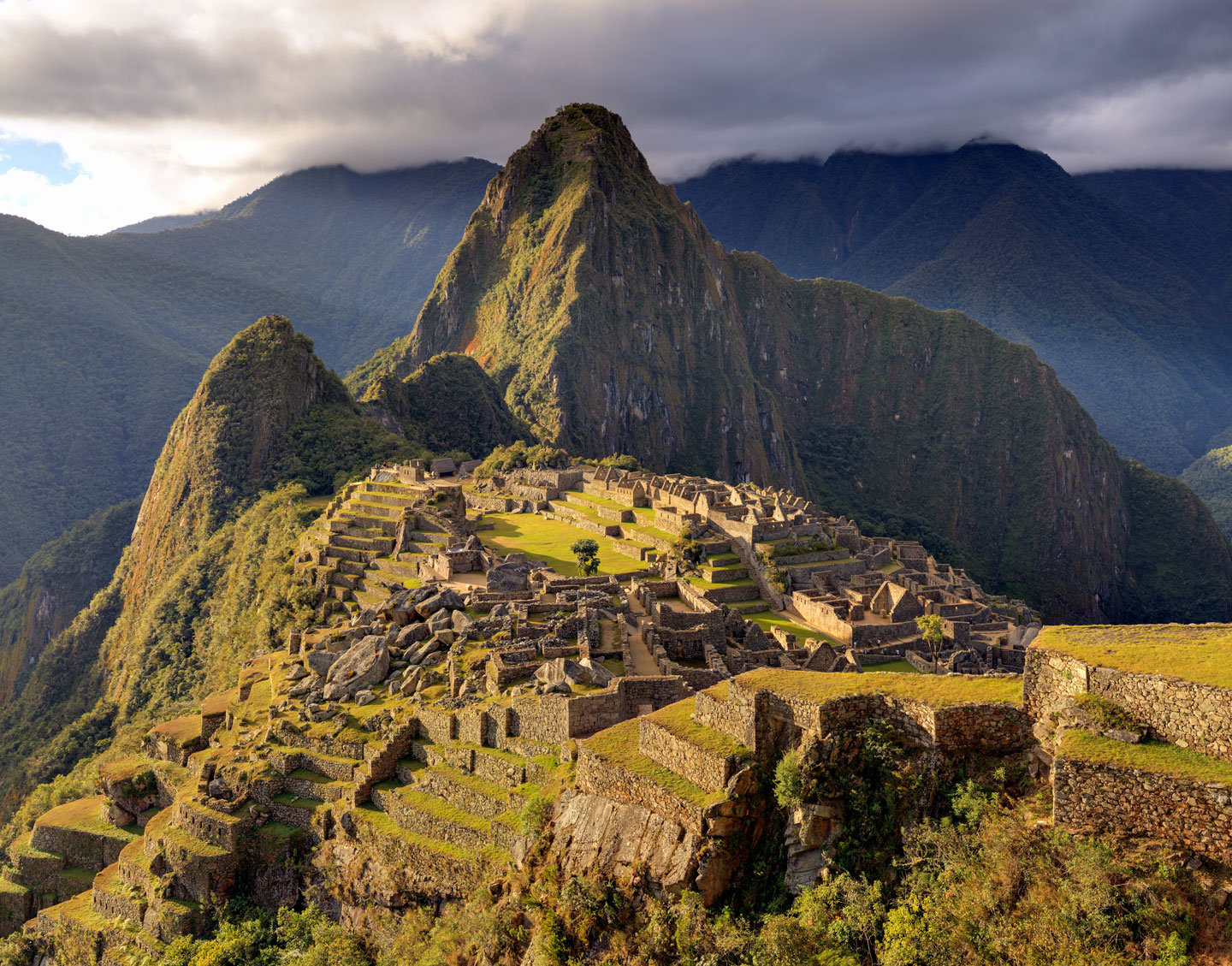 There are over 70 World Heritage Sites in South America. [WP]

, the planned city and capital of Brazil.
Brasília, the new capital, was built in the center of Brazil according to the plans of urban planner Lucio Costa and architect Oscar Niemeyer. The futuristic city was inaugurated on 21 April 1960.


Cuzco
The City of Cuzco

in the Peruvian Andes developed under the Inca king Pachacutec to become the core of the Inca Empire in the 15th century.

, a province of Ecuador, is an archipelago of volcanic islands in the Pacific Ocean. Galápagos is known as a unique 'living museum and showcase of evolution.' The islands became famous through Charles Darwin. His theory of evolution is based mainly on observations he made during his five-week stay on the archipelago. 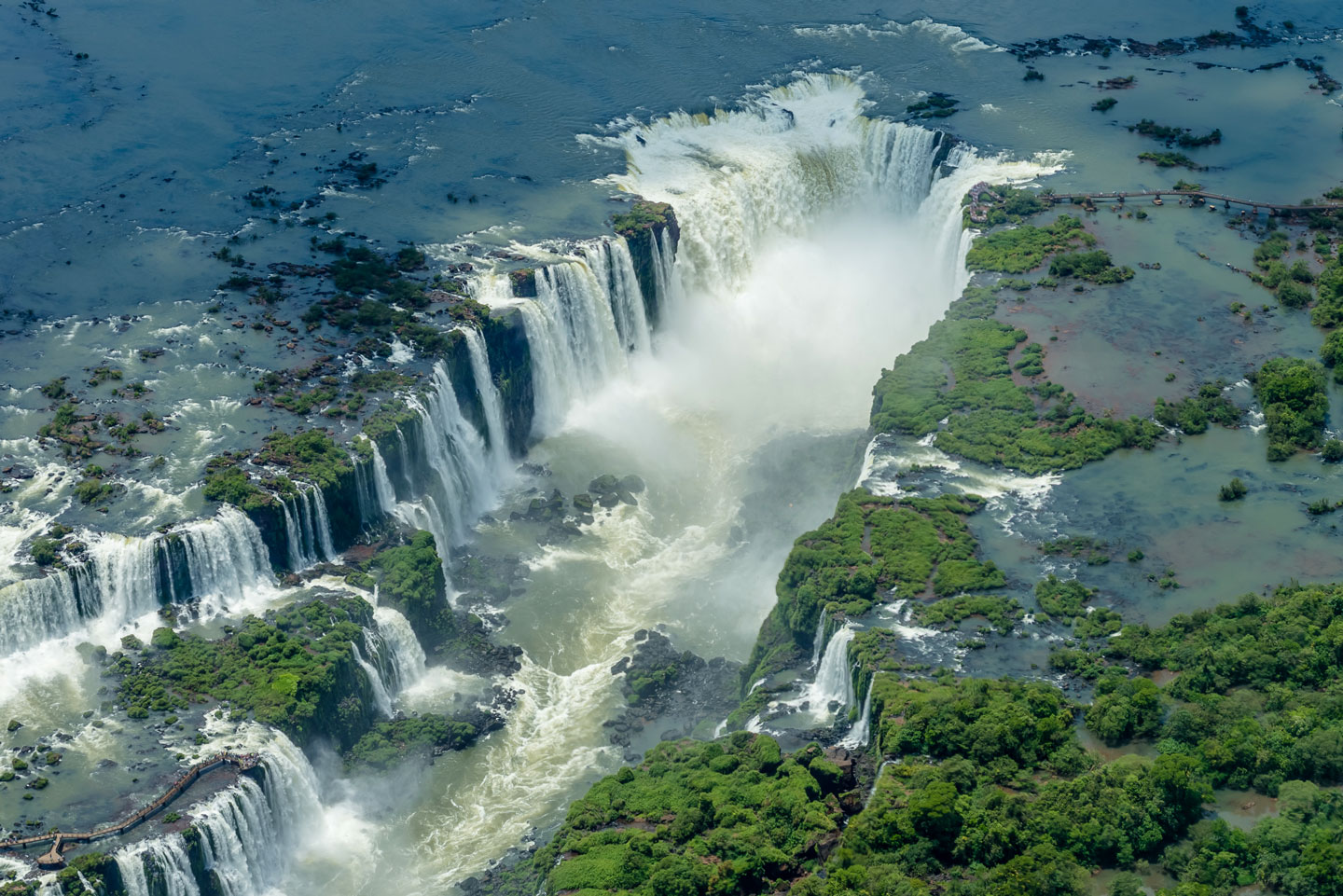 is located in the Brazilian State of Paraná and the Misiones Province of Argentina. The park with subtropical rainforest surrounds the Iguazu Falls, one of the largest and most spectacular waterfalls in the world.

was built during the middle of the 15th century and abandoned approximately 100 years later. Located 2,430 meters above sea level in the Peruvian Andes, the urban complex is considered the most important legacy of the Inca civilization, but its exact former use remains a mystery.


Nazca
Lines and Geoglyphs of Nasca and Palpa

are a group of gigantic geoglyphs made in the soil of the Nazca Desert in southern Peru. The lines were scratched on the ground's surface between 500 BCE and 500 CE. The Nazca Lines are among archaeological mysteries because of their number, nature, size, and continuity.


Quito
The City of Quito

was founded in the 16th century on the ruins of an Inca city; it is the best-preserved, least-altered historic urban center in Latin America.

includes the natural and structural elements that have shaped Rio de Janeiro's urban landscape, such as the Tijuca Massif, the Sugarloaf Mountain, Corcovado Hill with the famous statue of Christ the Redeemer, the Botanical Gardens founded in 1808, and the designed landscapes along Copacabana Bay.

The map shows the location of the following major cities in South America. 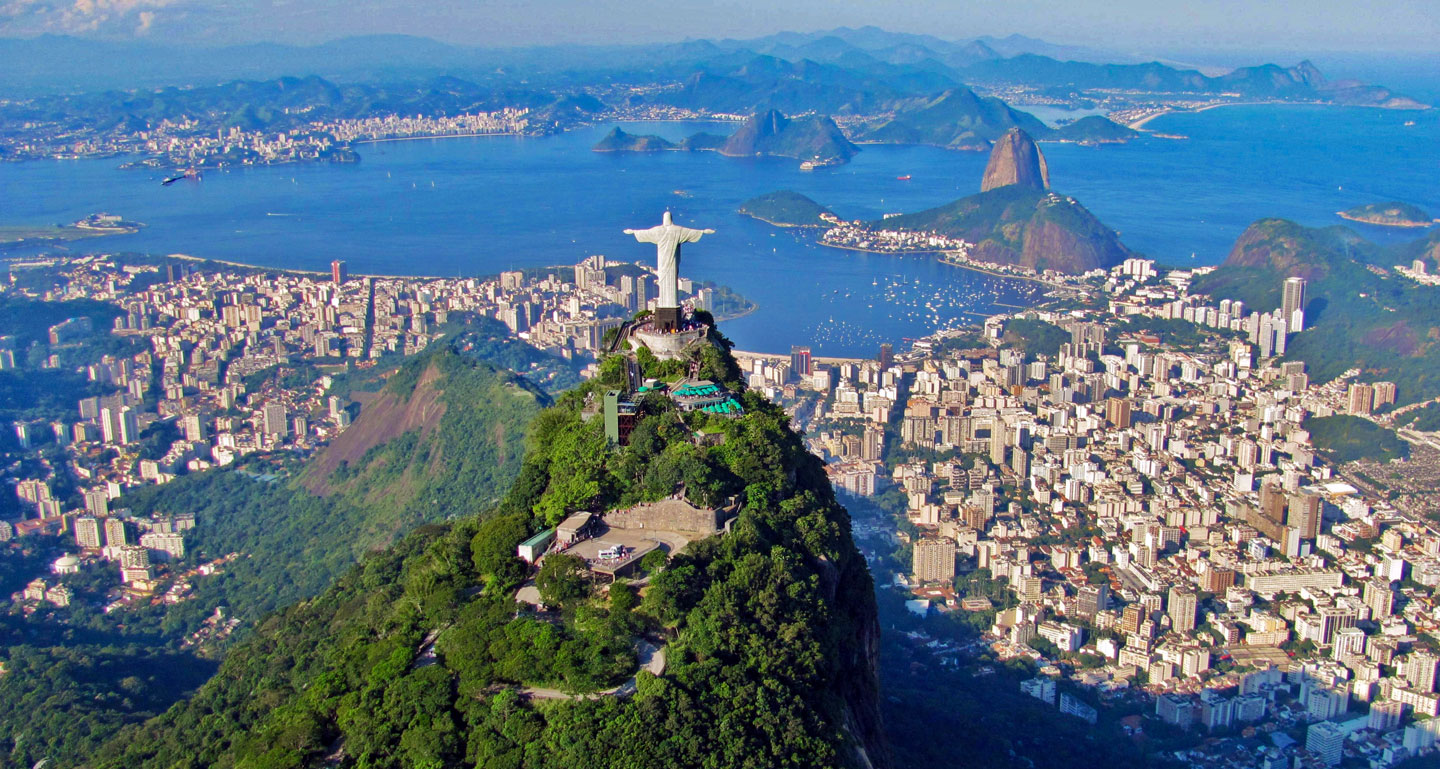 Flags of the Americas

Languages of the Americas

Political Map of Central America and the Caribbean