Most Famous Landmarks - The Great Wall of China

The Great Wall of China is one of the greatest wonders of the world. The rampart winds up and down across deserts, grasslands, mountains, and plateaus, stretching for approximately 6,700 kilometers (4,163 miles ) from east to west of China. The present wall dates largely from the Ming dynasty..
Image: Hao Wei

About the Great Wall of China (萬里长城)

"The long wall of 10,000 Li" (or 5,000 km) is a series of stone and earthen fortifications in China, built, rebuilt, and maintained between the 6th century BC and the 16th century AD. It is the world's most massive military structure. 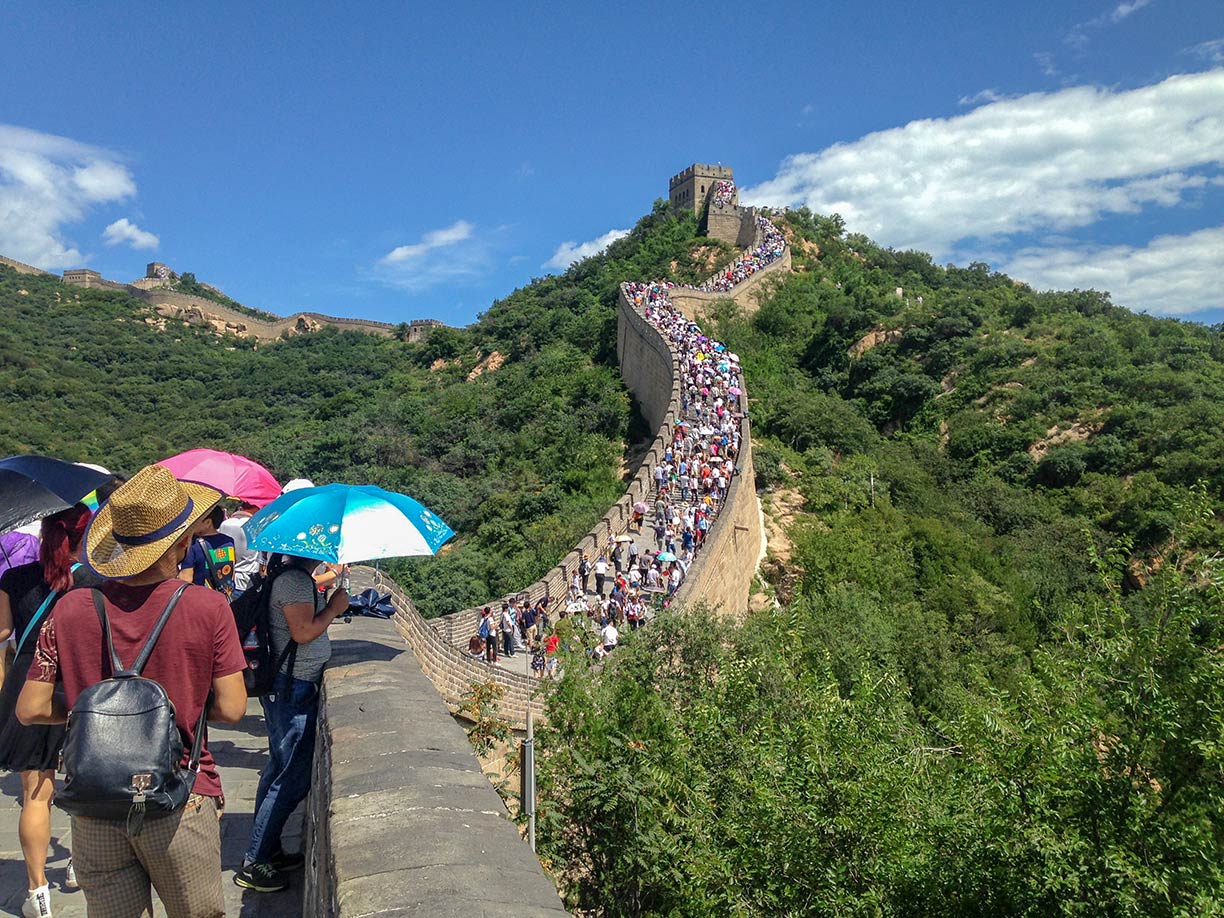 
Almost all of the successive Chinese dynasties built and expanded the Great Wall to protect the northern borders of the Empire. China's purpose was to prevent the incursions and recurrent attacks of the Xiongnu (匈奴) and other Wu Hu people, a confederation of pastoral nomads who lived on the steppes north of China.

There were long-standing tensions between the Xiongnu and the feudal states of China.

The Xiongnu lived mainly in the Ordos Desert of Inner Mongolia, a region poorly suited for agriculture. The prosperous settlements of feudal China to the south must have appeared to them like self-service outlets.

On the other hand, the Chinese states of Qin, Zhao, and Yan were eager to expand their territory, and they conquered a variety of nomadic areas inhabited by the Xiongnu.

Those encounters culminated in the Han–Xiongnu War, a series of military battles fought between the Chinese Han empire and the Xiongnu confederated state from 133 BC to 89 AD.

By 220 BC, the Xiongnu had grown into a dominant invading force in the north and started expanding both east and west.

Qin Shi Huang, the first emperor of the Qin dynasty, sent a 100,000-strong army headed by General Meng Tian to drive the Xiongnu northward. Under Meng Tian, the Qin forces began the defensive works on what is known today as the Great Wall to guard against invasion.

In 221 BC, Chinese emperor Qin Shi Huang ordered the demolition of parts of the wall, those sections which divided his new empire along the former state borders, and the construction of new protective barriers to connect the remaining fortifications along the empire's new northern frontier. The achievement was the precursor version of the current Great Wall. After Quin, the Han, Sui, Northern, and Jin dynasties, all repaired, rebuilt, or expanded sections of the Great Wall - at significant costs.

is a UNESCO World Heritage Site and a popular tourist destination.


How long is the Great Wall of China? 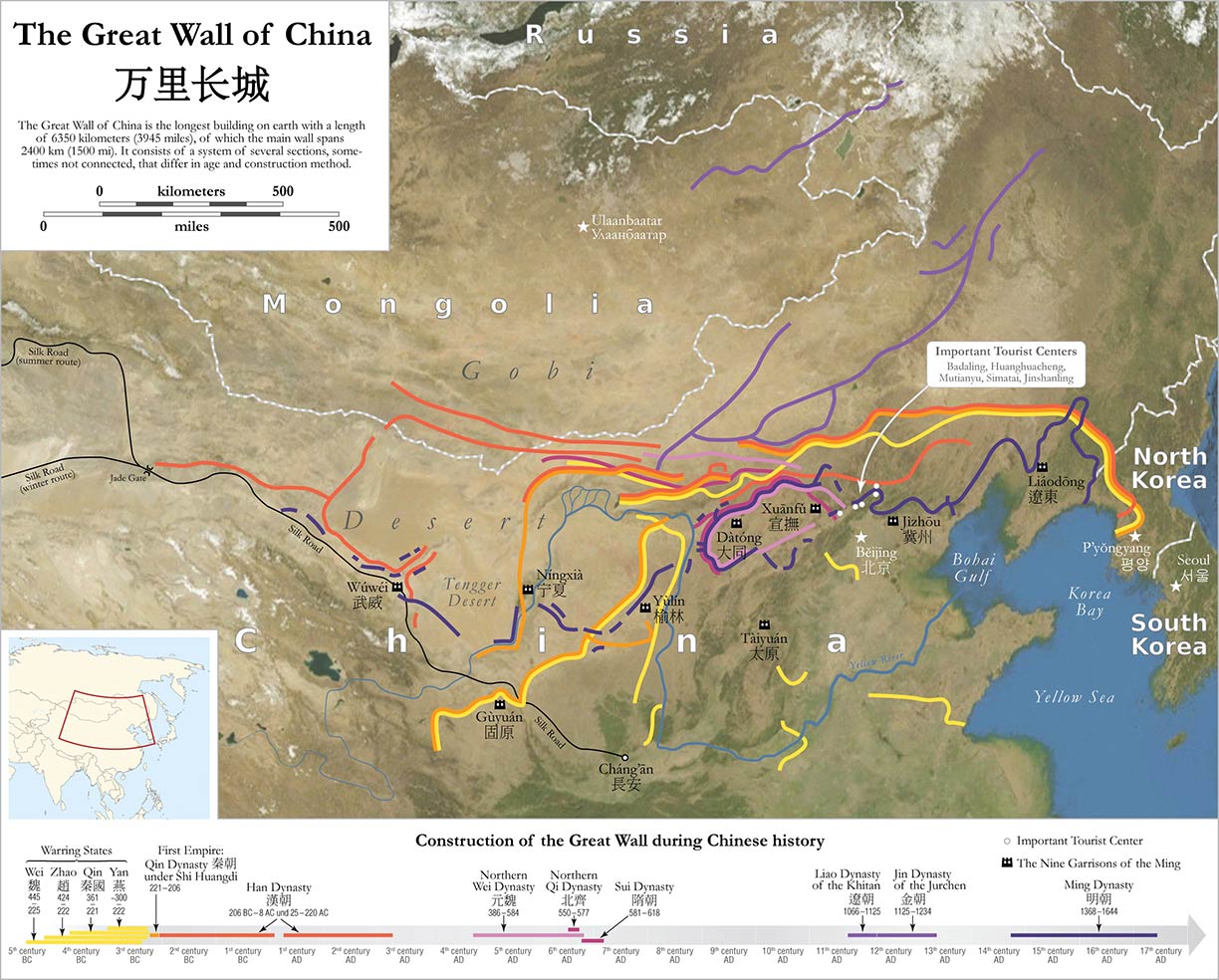 
According to the Chinese State Administration of Cultural Heritage, the total length of the Great Wall of China, including all segments of the fortification constructed in various dynasties, is 21,296 km (13,170 mi).
The real length is somewhat shorter because some sections of different eras were built on top of or right next to each other. The best-preserved part of the fortification is the Great Wall of the Great Ming Empire, with a length of 8,850 km (5,500 mi), but around 30% of China’s Ming-era Great Wall has disappeared.

Great Wall Issues
While some portions at Badaling, Mutianyu, and other tourist centers north of Beijing have been preserved and even reconstructed, in many locations, the Wall is in disrepair due to natural erosion and reckless human activity.

Did you know: The old claim that the Great Wall is visible from the moon is false, as you can see on the satellite images, large sections of the wall are hardly to detect. [1]

In 2009 a large section of the Great Wall was rediscovered by using infrared range finders and GPS devices. The Chinese government mapping study uncovered 'new' parts concealed by hills, trenches, and rivers that stretch from Hu Shan mountain in northern Liaoning province to Jiayu Pass in western Gansu province with a total length of about 290 km (180 mi). [2]

On the map below, zoom out to find the location of various sections of the Great Wall.

Most Populated Cities in China


Countries and Territories of Asia