Panorama view of the Tarfala valley in Lapland near Kiruna with Kebnekaise, Sweden's highest mountain in the center.
Image: Alexandar Vujadinovic

The map shows Sweden, officially the Kingdom of Sweden, one of the Scandinavian countries. The Nordic country is located in northern Europe, bounded by the Baltic Sea, the Gulf of Bothnia, the Kattegat, the Skagerrak, and the Öresund straits. It borders Norway in the west on the Scandinavian Peninsula; the Torne river forms most of Sweden's border with Finland in the east. A portion of the country lies north of the Arctic Circle. The country shares maritime borders with Denmark, Germany, Poland, Russia, Lithuania, Latvia, and Estonia.

Sweden covers an area of 450,295 km² making it roughly twice the size of Great Britain (island), or slightly larger than the U.S. state of California.

The kingdom's landscape is mostly flat with gently rolling lowlands; forests cover more than half of the country. In the west the country is getting mountainous, Sweden shares the Scandinavian Mountains, also known as the Kölen Fjällen range, with Norway. Within the northern part of the mountain range, near the border to Norway, is the highest mountain of Sweden, the Kebnekaise massif with 2,097 m (6,882 ft) at its highest point.
Almost 10 % of Sweden's area are lakes and rivers. Its largest lake is Lake Vänern, a surface area of 5,650 km² makes it the largest lake in the European Union.

The Swedish population of 10.2 million people is mainly concentrated in the southern part of the country. Spoken language is Swedish, a North Germanic language, similar to Danish and Norwegian; English is taught in school and widely spoken.

Scandinavia is a historical and cultural-linguistic region; it comprises the three kingdoms of Norway, Sweden and Denmark. The term Scandinavia referred originally to Scania (Skåne), a region formerly Danish, now Swedish. 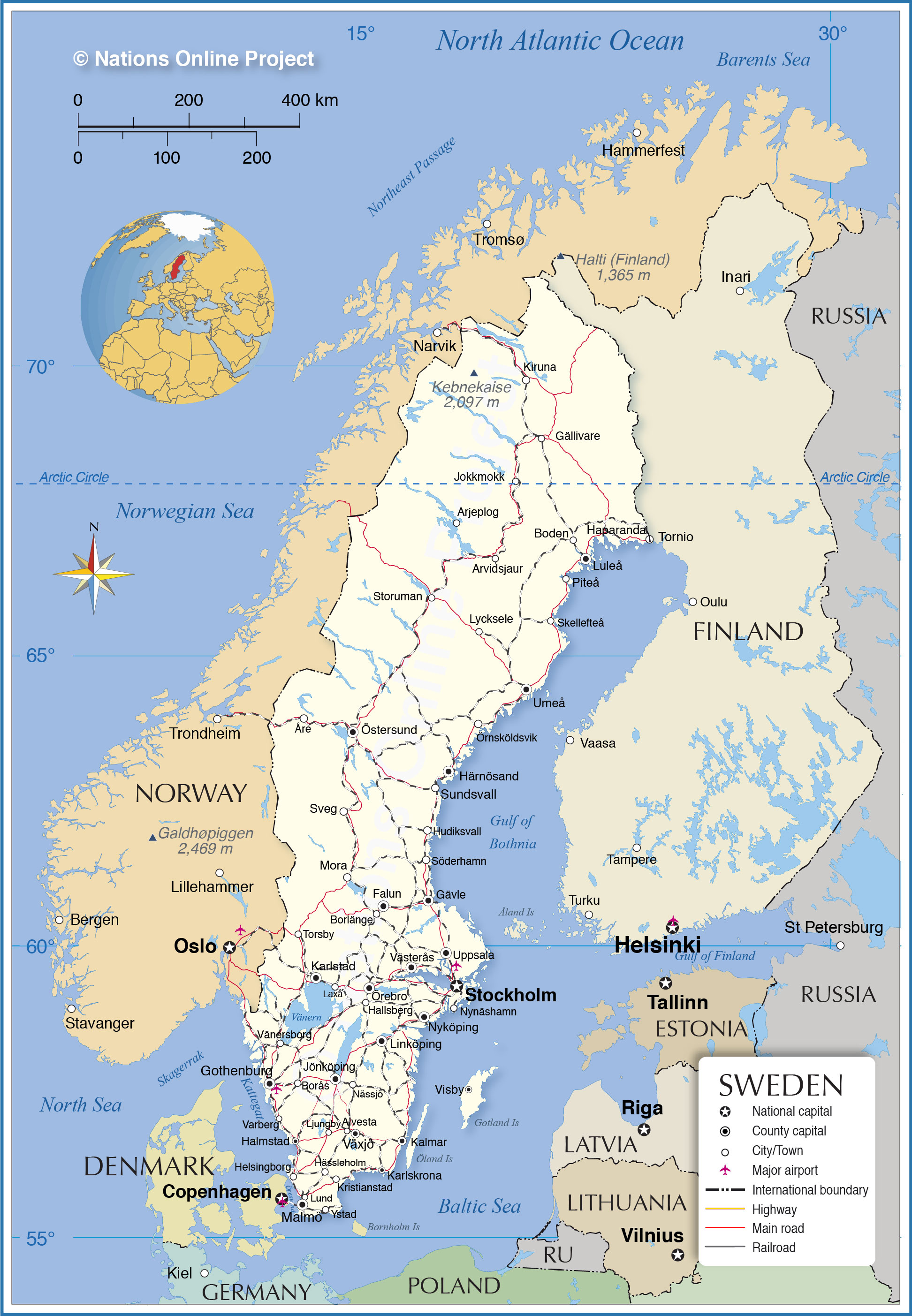 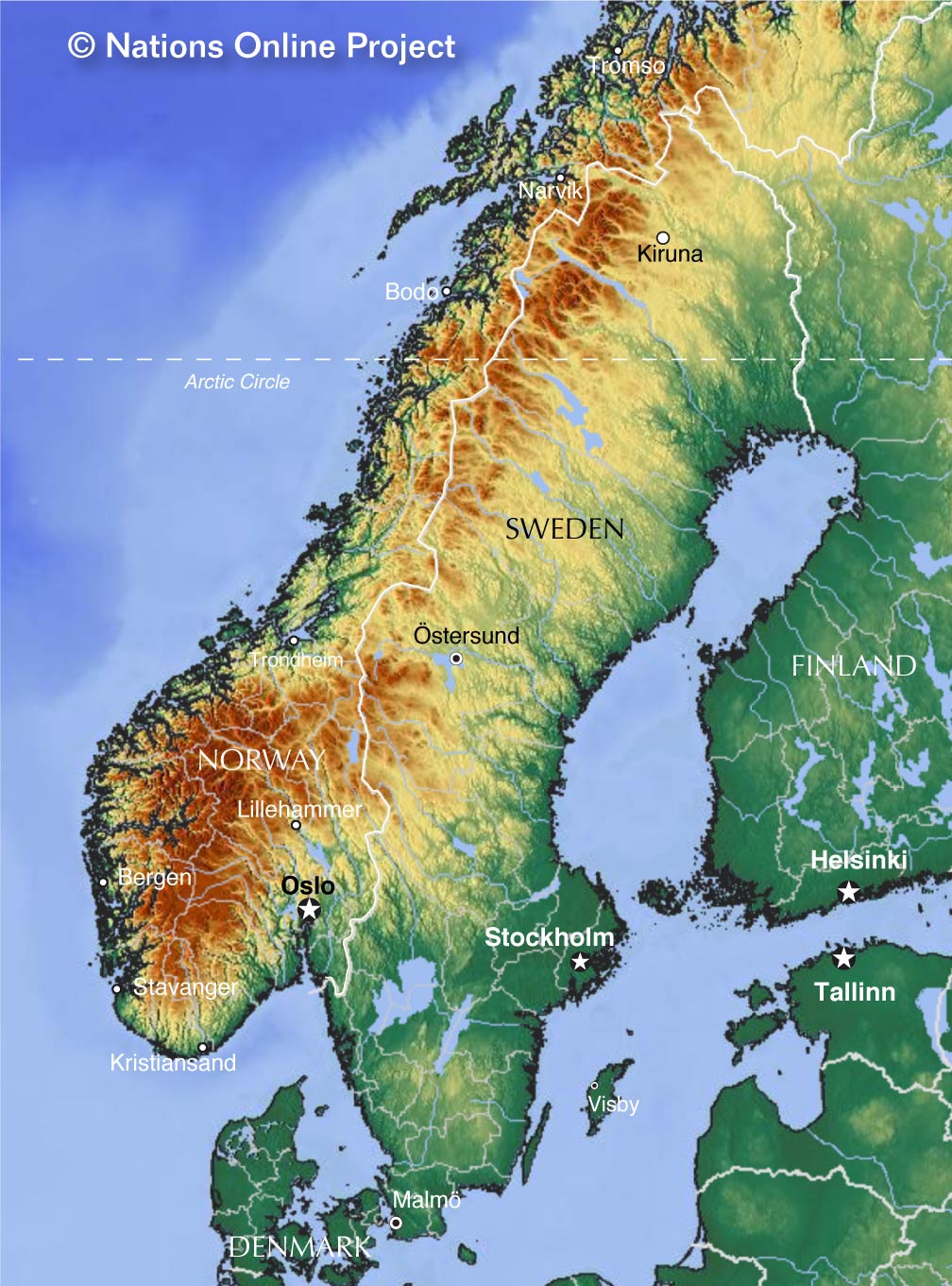 Topographic map of the Scandinavian Peninsula, shared by Sweden and Norway.


The Kingdom of Sweden is a parliamentary monarchy. The head of state is the monarch, but the king has no political power and does not participate in political life.

Sweden's territory includes the eastern part of the Scandinavian Peninsula and the islands of Gotland and Öland.


Climate
Sweden's climate is influenced primarily by its proximity to the Atlantic Ocean with the warm Gulf Stream and is quite mild for its geographical location.

Stockholm
Sweden's capital expands across fourteen islands which are connected by more than 50 bridges. The seaport and the country's largest city is situated on Sweden's eastern coast of the Baltic Sea at the mouth of Lake Mälaren. Nearly one million people call the city home. Stockholm is famous for its iconic city hall, the old town Gamla stan with the Royal Palace, the Vasa Museum maritime museum, and the Skansen, the first open-air museum and zoo in Sweden.

Gothenburg
Sweden's second-largest city is the capital of the Västra Götaland County and an important seaport, located on the Kattegat (sea) on the west coast of Sweden.
The university town on the river Göta älv is famous for its Dutch-style canals in the old part of the city. Gothenburg's economy is based on trade and shipping, manufacturing and industry (Volvo). The city is also a starting point for excursions into the Gothenburg Archipelago off the coast of Gothenburg.

Malmö
The country’s third largest city is the capital of the Scania province and a cultural and economic hub in southern Sweden. Since the opening of the Øresund Bridge in 2000, which connects Malmö with Denmark's capital Copenhagen, the Malmö metropolitan area became one of the centers of the Øresund Region, also known as Greater Copenhagen. Malmö is famous for Malmö Castle, the 16th-century fortress built by the Danish King Christian III, the Turning Torso, a futuristic skyscraper, and Emporia, one of the biggest shopping malls in Scandinavia.

Uppsala
The famous university town is the country's fourth largest city. Sweden's oldest university was founded in 1477. The city is one of Sweden's main tourist attractions, renowned for its Gothic style Uppsala Cathedral, the 16th-century royal castle, the Archbishop's Palace, its central park, and several botanical gardens and botanical museums. Most of the town attractions are in the Fjärdingen neighborhood.

Västerås
The port and industrial city is the capital of Västmanland County, located on Lake Mälaren, Sweden's third largest lake. The city comes with a monastery, a Gothic cathedral, a gymnasium, a university, and two castles.
In the outskirts of the town lies Anundshög, one of the largest and most important burial grounds of the Viking Age.

The map shows the location of following Swedish cities: