Map of Provinces of Nepal

The Rara Lake in Karnali province is the largest freshwater lake in the Nepalese Himalayas.
Image: Aadesh Baniya

Nepal is a mountainous landlocked country in the Himalayas south of the Tibet Autonomous Region (Xizang, China) and surrounded by India in the west, south and east. Nepal shares borders with the Indian states of Uttarakhand, Uttar Pradesh, Bihar, West Bengal, and Sikkim.

The country covers an area of 147,181 km², which is slightly larger than 1.5 times the size of Portugal or somewhat larger than the U.S. state of Arkansas.

Nepal has a multi-ethnic population of 30.3 million (2021). The largest city and the national capital is Kathmandu. Lumbini in the Tarai, the birthplace of Siddhartha Gautama (the Buddha), is one of the most sacred places for Buddhists.

The map shows Nepal's seven new provinces, which replaced the old administrative regions in 2015.
After many attempts by parliament to draft a new constitution and find the ideal administrative division of the former kingdom, the seven-province model was adopted by the major political parties in August 2015. [1] [2] 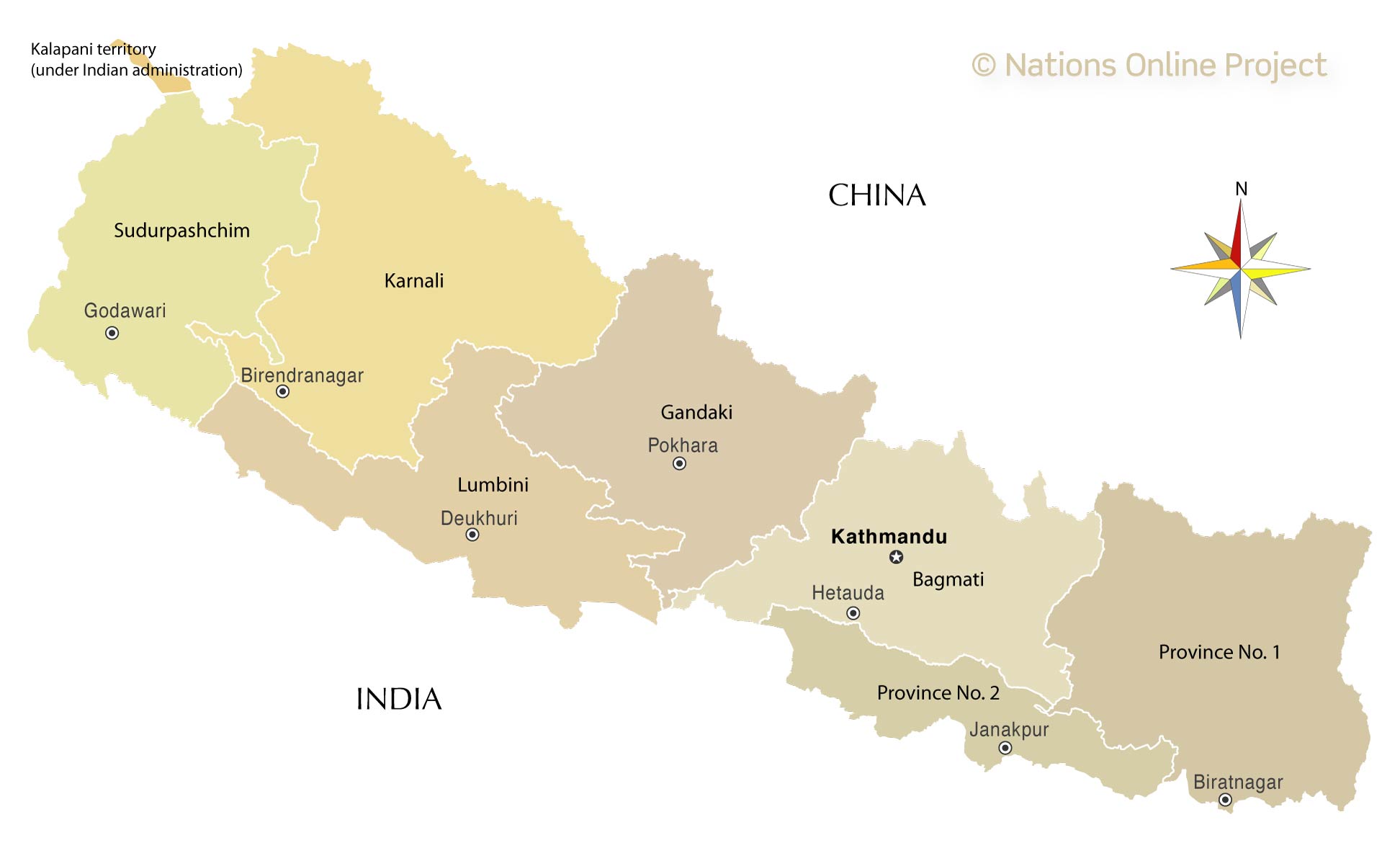 The map shows Nepal's seven provinces and Kalapani territory (under Indian administration, claimed by Nepal), the national capital Kathmandu, and the province capitals. 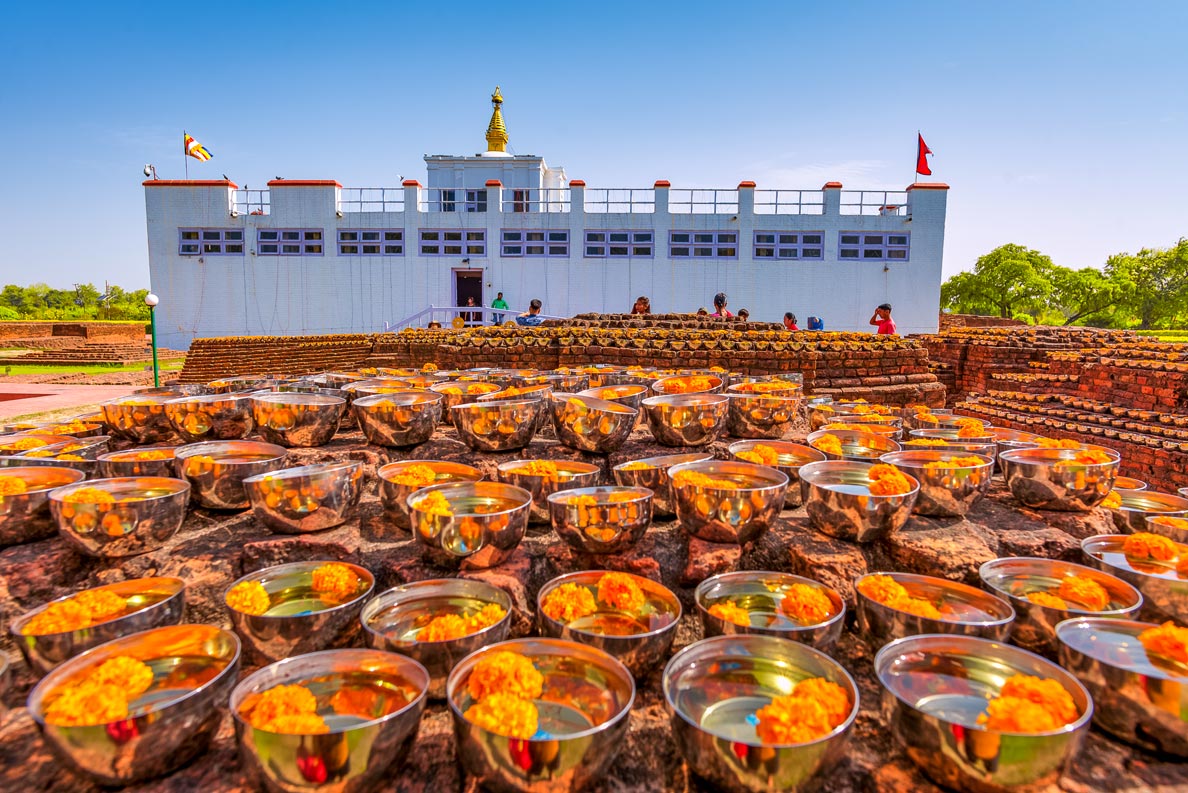 The Maya Devi Temple in Lumbini is, according to legend, the birthplace of Siddhartha Gautama, better known as the Buddha.
Photo: Samde Sherpa

The seven provinces of Nepal were formed after the adoption of the new Constitution of Nepal on 20 September 2015. The naming of the province and the seat of the local government, the administrative capital, is entrusted to the respective provincial parliament. Two of the seven provinces still have their temporary names, Province No. 1 and Province No. 2.


Sudurpashchim Pradesh
Nepal's westernmost province, formerly named Province No. 7, has a population of 2.5 million people. The main languages are Doteli and Nepali.

Sudurpashchim borders India to the west and south and the People's Republic of China with the Tibet region to the north.

The province is home to the Api and Saipal mountains, two seven-thousanders in the Gurans Himal mountain range.

The capital is Godawari (Kailali); the largest city is Dhangadhi, other major cities are Bhimdatta (Mahendranagar) and Tikapur.


Karnali Pradesh
Nepal's largest province, temporarily called Province No. 6, is named after the Karnali River. Karnali is the province with the least population, having only about 1.8 million inhabitants. The main spoken language is Nepali.

The capital and largest city is Birendranagar.

The province is home to Lake Rara, the largest freshwater lake in the Nepalese Himalayas and a popular pilgrimage site for Nepalis. 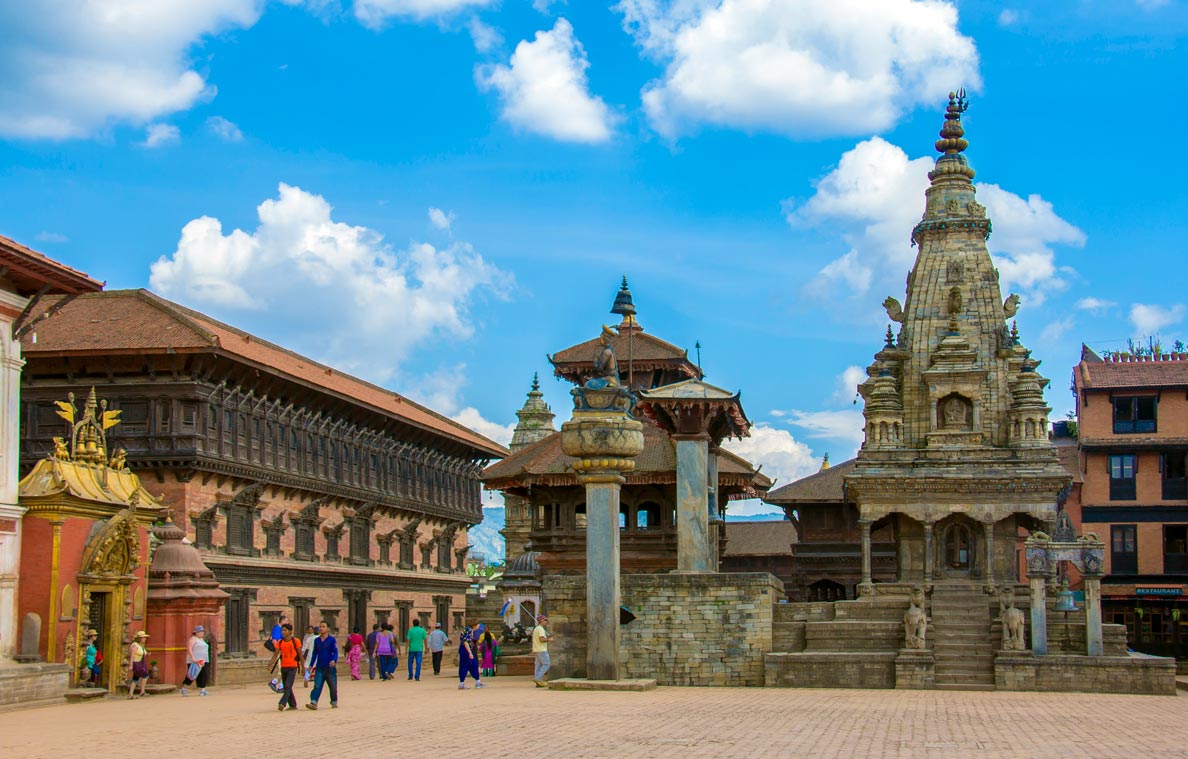 Bhaktapur Durbar Square is the square in front of the Royal Palace of the ancient Bhaktapur Kingdom. On the left side is the 55-window palace, the King Bhupatindra Malla Pillar and the Great Bell in front of the Dattatreya Temple in the center. The Vatsala Durga Temple on the right was destroyed in the 2015 earthquake; it was restored to a close approximation of its original condition in 2020. The town square is part of the UNESCO World Heritage Site of Kathmandu Valley.
Photo: Saroj Pandey

Lumbini Pradesh
Lumbini borders Uttar Pradesh and Bihar of India to the south. The province is named after the sacred pilgrimage site of Lumbini, the birthplace of Gautama Buddha - the founder of Buddhism. Lumbini has a population of 4.5 million people. The main language is Nepali (50%).

The capital is Deukhuri; the largest City is Ghorahi. Other major towns are Butwal, Siddharthanagar, Nepalganj, Tansen and Tulsipur. Lumbini Pradesh is home to the Tharu, Magar, Chhetri and Brahman-Hill Ethnic groups.


Gandaki Pradesh
Gandaki borders China's autonomous region of Tibet to the north. The province is named after the River Gandak, one of the many tributaries of the Ganges. Gandaki has a population of 2.4 million people. The major ethnic groups/caste are Brahman-Hill (21%), Magar (19%, Chhetri (13%) and Gurung (11%). The main language is Nepali (73%), the major religion is Hinduism (84%).

The province was temporarily called Province No. 4. After the announcement of the new name, there were protests from residents who favored the name Tamuwan, a proposed Tamu ethnic state within Nepal. The capital and largest city is Pokhara.


Bagmati Pradesh
The Bagmati province borders the Tibet Autonomous Region of China to the north. The province is home to the Kathmandu Valley and the national capital Kathmandu. Hetauda is the state capital; the largest city is Kathmandu. Other major cities and towns are Lalitpur (Patan), Bharatpur, Budhanilkantha and Gokarneshwar. The city of Bhaktapur is famous for its many temples.

The province is named after the Bagmati River, one of the sacred rivers of Nepal. Before the renaming, Bagmati was temporarily designated as Province No. 3. 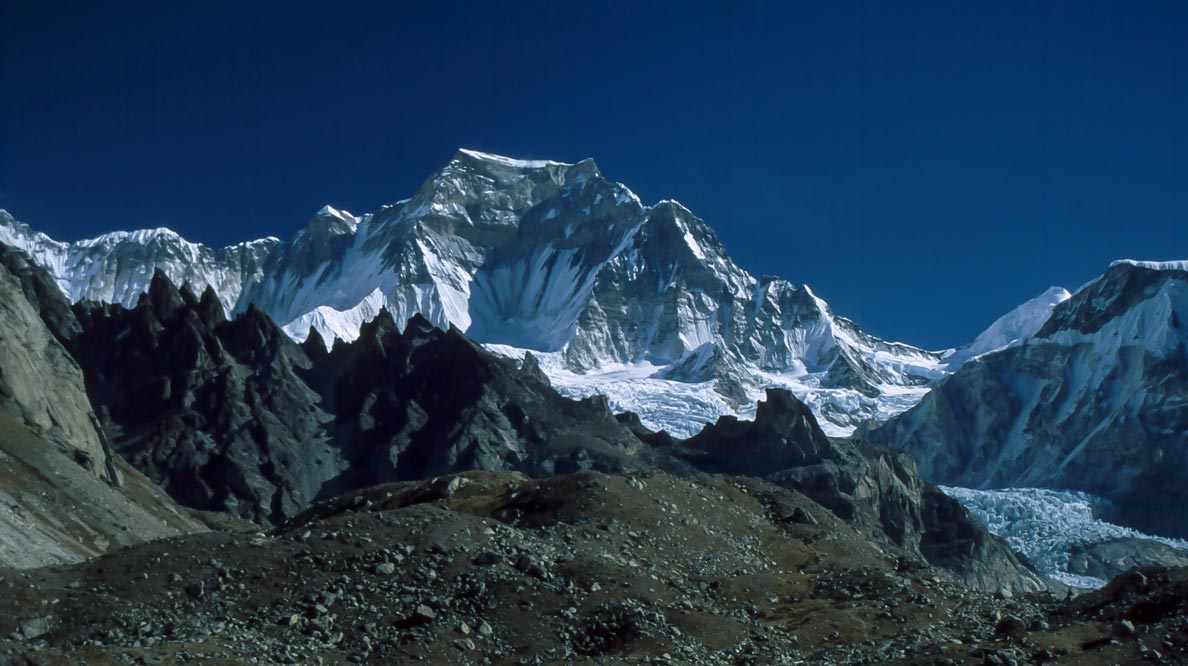 Gyachung Kang, at 7,952 m, is a mountain in the Mahalangur Himal section of the Himalayas in Province No. 1.
Photo: Wolfgang Dressel

Province No. 2
Province No. 2 does not yet have an official name; suggested names are Madhes or Mithila-Bhojpura. The smallest province of Nepal has a population of 5.4 million people. The majority of the population is Hindu (85%). The main languages are Maithili (45%) and Bhojpuri (19%). The interim province capital is Janakpur; the largest city is Birgunj.
Province No. 2 is home to the Gadhimai festival, a centuries-old tradition of the Madheshi people and a sacrificial ceremony held every five years at the Gadhimai Temple of Bariyarpur. The event is the largest ritual slaughter of animals in the world - just to please Gadhimai, a Hindu goddess of power.


Province No. 1
Province No. 1 is also still waiting for its official name. The easternmost state of Nepal borders the Tibet Autonomous Region of China to the north and the Indian states of Bihar, West Bengal and Sikkim.
The provincial capital Biratnagar, an industrial city in the Tarai region, is located just north of the Nepal-India border. Other major cities are Damak, Dharan, Itahari, Inarua and Birtamod.
Province No. 1 is home to the country's first national park, Sagarmāthā National Park. The World Heritage Site is described as an outstanding area of dramatic mountains, glaciers and deep valleys, dominated by Mount Everest, the world's highest peak (8,848 m). Other world-famous peaks in Province No. 1 are Kangchenjunga, Lhotse, and Nuptse.

Satellite View and Map of Nepal