Gangkhar Puensum seen from Gophu La Pass; it is Bhutan's highest mountain at an elevation of 7,570 m (24,836 ft) and most likely the highest unclimbed mountain in the world.
Image: Gradythebadger 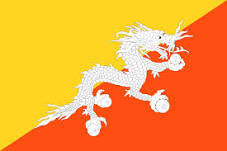 The map shows Bhutan, officially the Kingdom of Bhutan, also known as Druk Yul - the Land of Thunder Dragon. The kingdom is a landlocked country on the southern slopes of the eastern Himalayas. It borders the Indian states of Sikkim in the west, West Bengal and Assam in the south, and Arunachal Pradesh in the east, and it shares a border with China (Xizang - Tibet Autonomous Region) in the north.

With an area of 38,394 km², the country is somewhat smaller than Switzerland or about half the size of the US state of Indiana. Bhutan's landscape is mountainous interspersed with fertile valleys; it offers a pristine environment with a spectacular biodiversity.

The country's landscape offers three major regions. South of the outer foothills of the Himalayas along its southern border are the Dooars (Duar). The Terai-Duar savanna and grasslands are Bhutan's very narrow portion of the subtropical and tropical alluvial floodplains of the Ganges-Brahmaputra lowlands (Indo-Gangetic Plain).
To the north of the plains the land rises steeply, the landscape is dominated by the mountains of the Sub-Himalayan Range. The kingdom has one of the most rugged mountain terrains in the world. The 1,000 to 3,000 m high ranges of the sub-alpine Himalayan region (Outer Himalaya) are the main settlement area.
The high mountain region lies south of the border to Tibet with hundreds of unnamed, unmapped, and unclimbed peaks. The Great Himalaya range is home to Bhutan's highest mountain, the 7,570 m high Gangkhar Puensum, which is most likely the highest mountain in the world which has never been climbed by a human being.

Bhutan has a population of 742,000 inhabitants (in 2019); it is South Asia's second least populous country. The capital and largest city is Thimphu. Spoken languages are Dzongkha (official), Tshangla, Nepali, Dzala, Kheng, and other East Bodish languages.

For centuries the kingdom has remained completely isolated from the outside world. Only in 1974, Bhutan began to open its isolated country to foreigners; 287 tourists visited Bhutan in that year. Today, more than 200,000 people visit the kingdom each year. All tourists must book their travel through a licensed Bhutanese tour operator (or international partner). 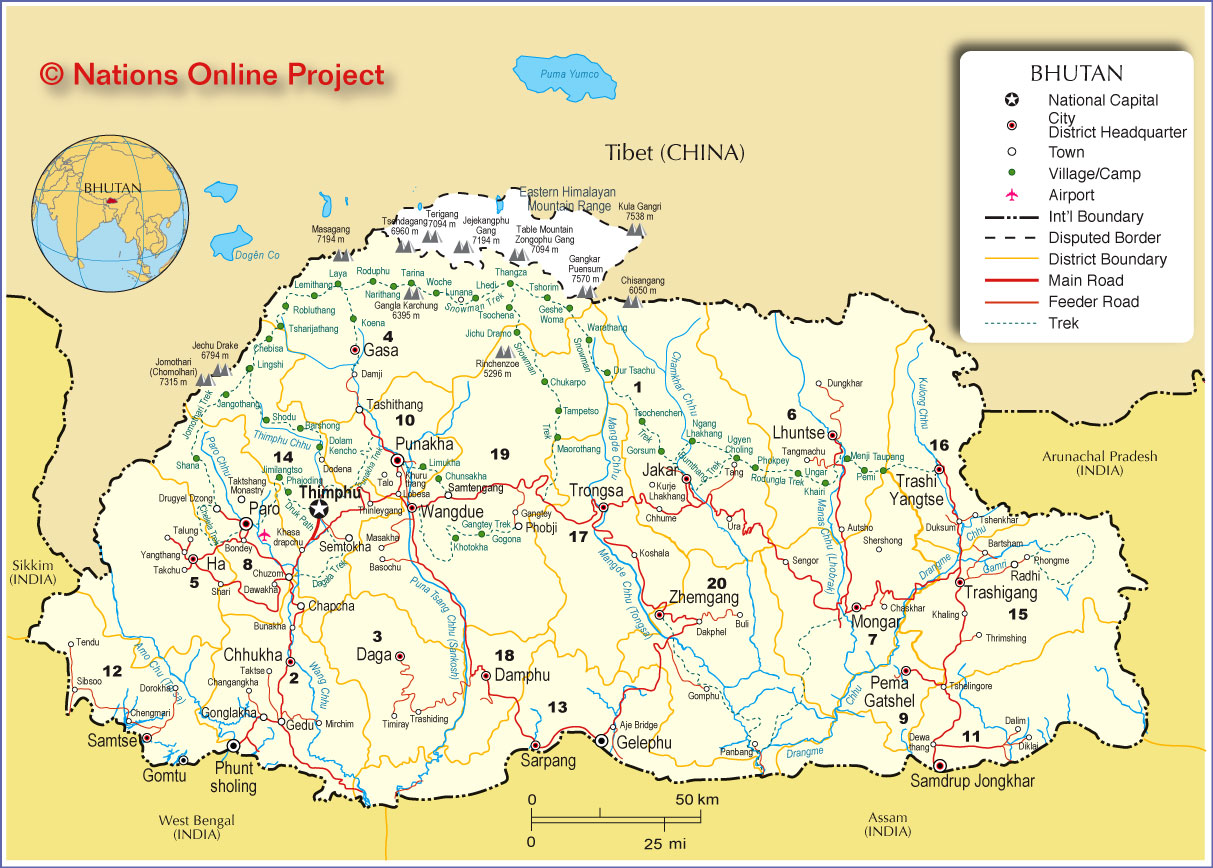 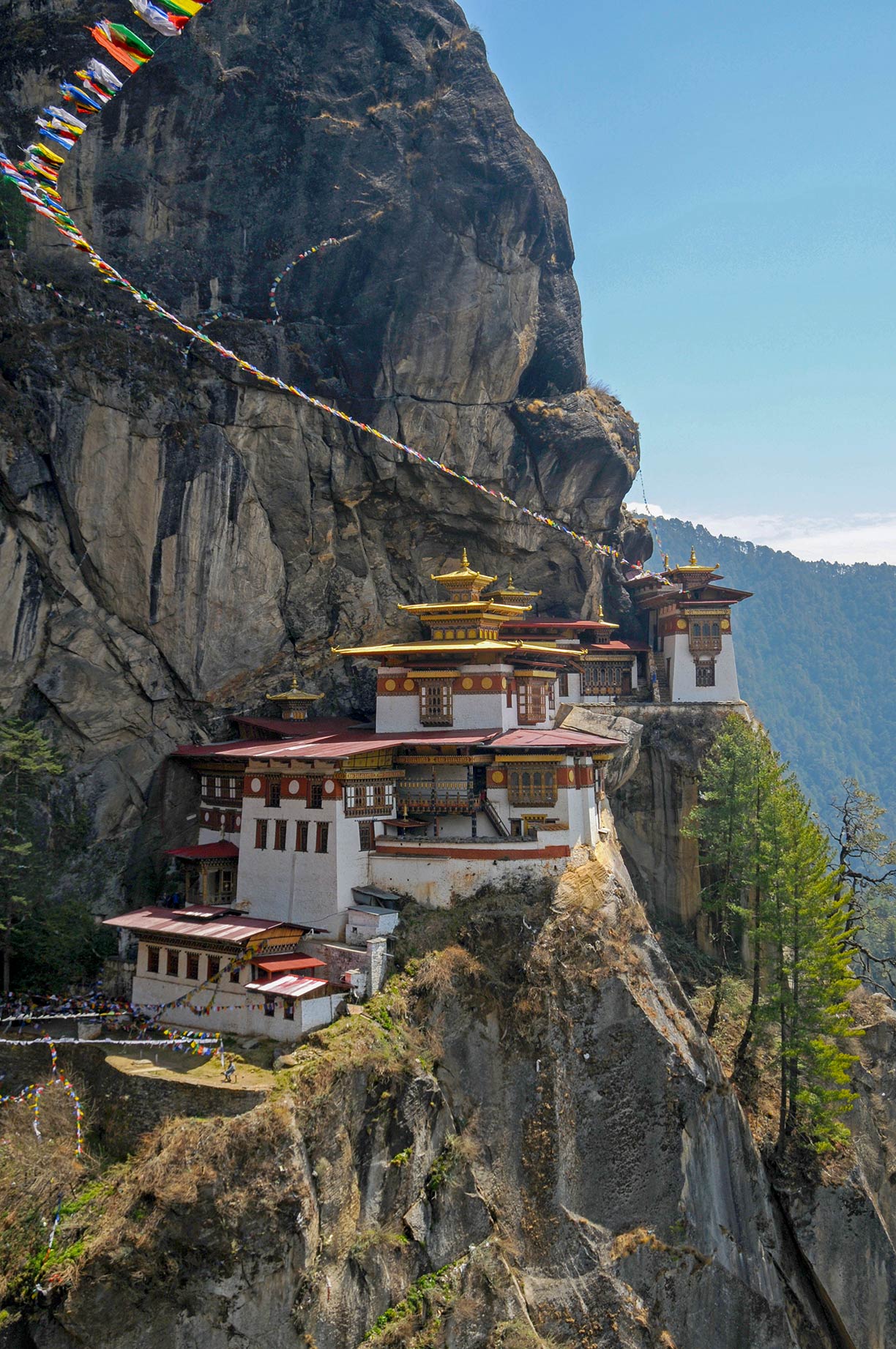 Taktsang, a Buddhist temple complex and monastry located at an elevation of 3120 m in the upper Paro valley. The monastery complex is a cultural landmark of the Kingdom of Bhutan.
Photo: David Broad

Thimphu, the capital and largest city of Bhutan is located on the west bank of the Thimphu Chu River (Raidāk River).

Phuntsholing at the India-Bhutan border is the nation's financial, industrial and trading capital.

Paro, the historic town with many sacred sites is also home to the National Museum of Bhutan.

Punakha, the village is known for the Punakha Dzong, a 17th-century fortress at the juncture of the Puna Tsang and Mo Chhu rivers. Behind Phunaka Dzong is Phuntsho Pelri the King's Summer Palace and a royal museum.

Gelephu, the third largest town in the kingdom, is located in the Sarpang district in the central-south of the country on the Indian border.

Samdrup Jongkhar is another Bhutanese border town in the southeast of the country bordering India's Assam state.