Skyline of Taipei with Xinyi Special District (on the right) with Nan Shan Plaza, the W Hotel, the famous Taipei 101 Tower, the highest building in Taiwan and the Farglory Financial Center. The Minquan Bridge (front) and the First and Second MacArthur (center) bridges over the Keelung River.
Image: Taiwankengo 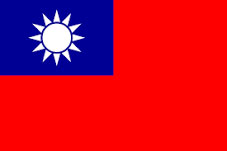 The map shows Taiwan, an island nation in East Asia, between the East China Sea in the north and the South China Sea in the south. Taiwan's main island is located east off the southeastern coast of the People's Republic of China, separated by the Taiwan Strait and 370 km (230 mi) north of Luzon Island (Philippines).
Taiwan shares maritime borders with China, Japan and the Philippines.

The Republic of China (ROC) is the official name of the territory and government of Taiwan; it consists of the main island, formerly known as Formosa, and several small islands and islets in the Taiwan Strait. The ROC also claims sovereignty over several small islands and islets scattered across the South China Sea as far as the Spratly Islands. Defacto administered islands by the ROC are the Kinmen Islands (Quemoy) and the Matsu Islands (Lienchiang County), two island groups close to the Chinese mainland, and the Penghu archipelago (or Pescadores Island) in the Taiwan Strait.

With an area of 36,188 km², Taiwan is somewhat larger than Belgium or slightly smaller than the U.S. states of Delaware and Maryland combined.

Taiwan has a population of 23.4 million (2021); the vast majority of the population lives in the lowlands on the west and north coasts of the island. Capital city is Taipei, the largest city is New Taipei City, an urban agglomeration to the southwest of the capital. Spoken languages are Mandarin Chinese (Putonghua; official) and Taiwanese (Taiwanese Hokkien), regional languages are Hakka and Formosan languages. The main religions are Buddhism (35%) and Taoism (33%). 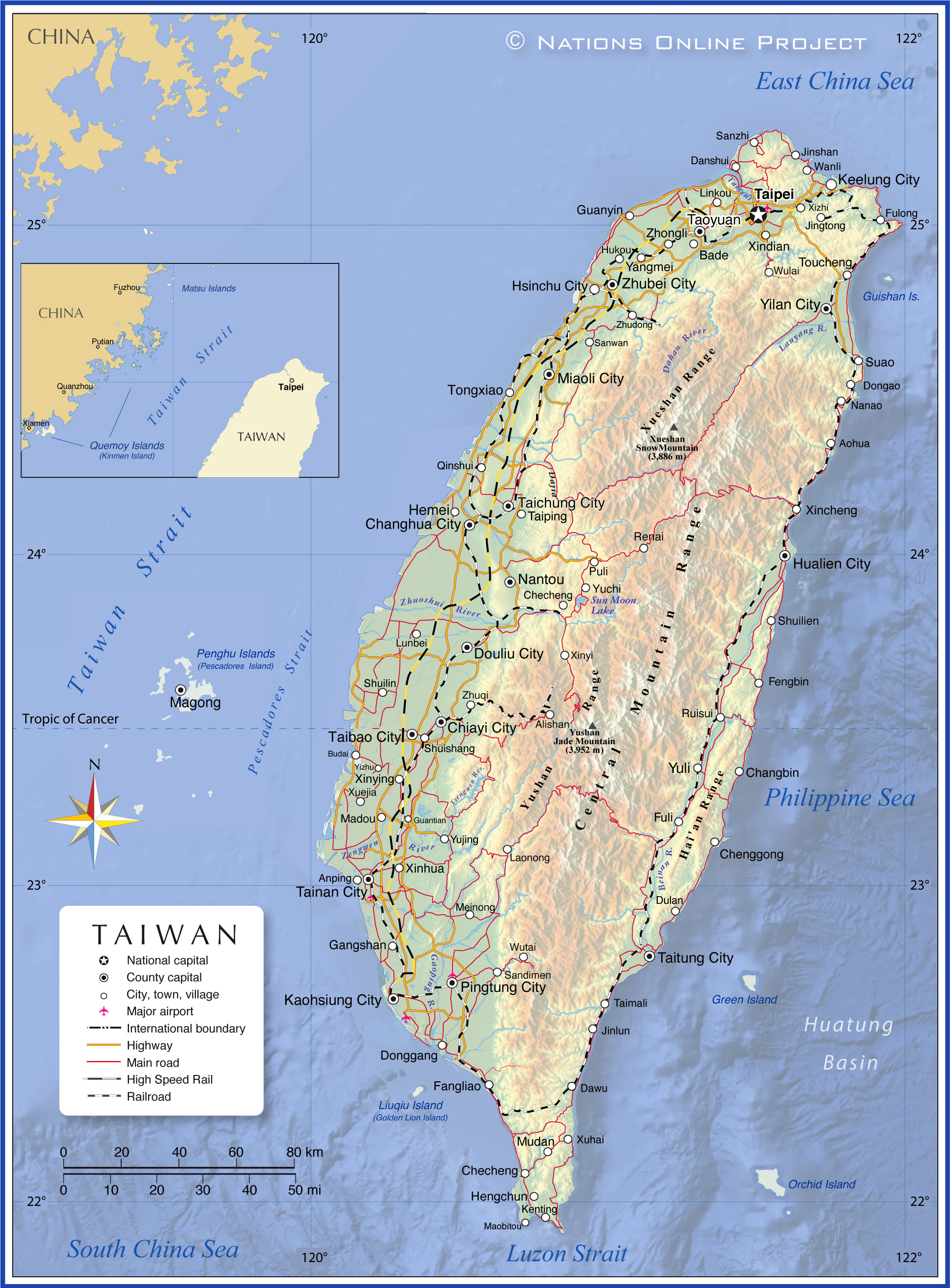 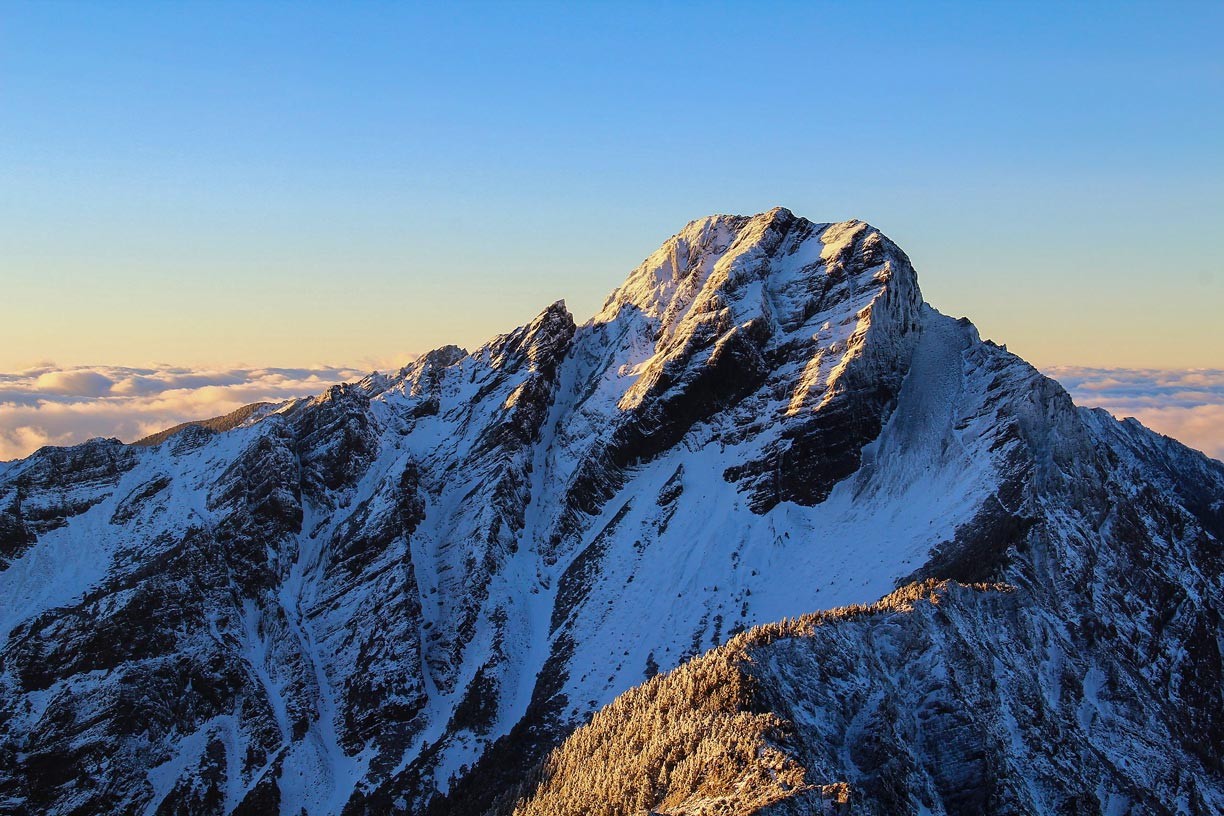 Taiwan, officially the Republic of China or ROC, is an island separated from southwestern mainland China (Fujian) by the relatively shallow (less than 200 m (660 ft) deep) Taiwan Strait, which is 110 to 140 km wide.


Taiwan was possibly once part of the Asian mainland, as the entire island sits on the Eurasian continental shelf.
However, immediately behind the island's southeast coast, the seabed drops steeply to a depth of up to 6,000 meters. The submarine depth is known as the Huatung Basin.


Islands
The territory of Taiwan includes several smaller islands and islets, the Penghu archipelago (Pescadores Islands) and the Kinmen and Matsu Islands near the coast of mainland China and Liuqiu island (Lamay Island) in the Taiwan Strait and the Orchid and Green islands in the Philippine Sea. The Guishan Island (Kueishantao) off the coast of northeast Taiwan is a tiny, turtle-shaped island with a dormant volcano, active undersea fumaroles, and sulfur gas-emitting solfataras.


Relief
The relief of Taiwan's main island consists of a series of mountain ranges running from north-northeast to south-southwest. The forested folded mountains in the interior slope steeply to the Pacific Ocean in the east, while in the west, they descend more gently to the Taiwan Strait and merge with rolling plains. 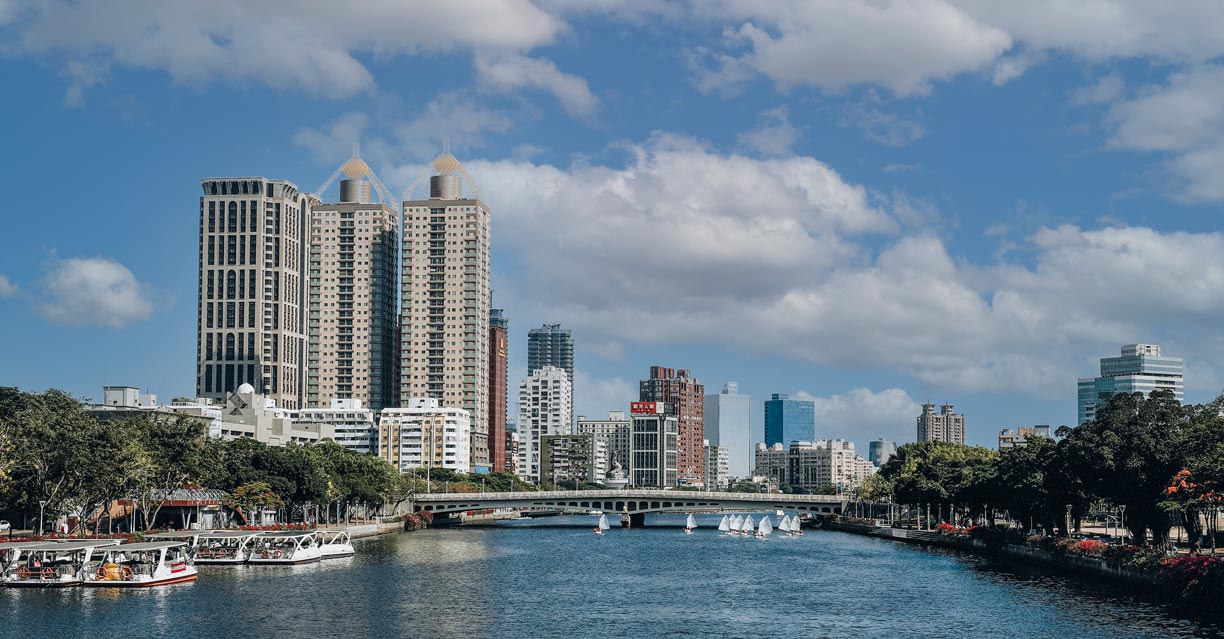 The Love River flows through Kaohsiung City's Qianjin District, the Twin Towers (Illuna Towers) to the left. Kaohsiung is a major port and Taiwan's third most populous city.
Image: weichen_kh

Mountains
Taiwan is one of the countries in the world with the highest density of high mountains. There are over 260 mountains on the island that are higher than 3,000 meters. Yu Shan mountain (玉山) or Yushan, also known as Jade Mountain, is the highest summit in East Asia. It is located just north of the Tropic of Cancer in the Yushan Range. At 3,952 m (12,966 ft), it is the 4th-highest peak of any island in the world. Taiwan's highest mountain is the centerpiece of Yushan National Park, one of the country's nine national parks.
Other three-thousanders include Xueshan (Snow Mountain), Mount Xiuguluan, Mount Mabolasi, Mount Nanhu and Mount Guan, to name a few.


Rivers
Taiwan's many rivers thread through the island's mountains and valleys like ice crystals on a pane, an intricate fractal network of many waterways draining the interior. Most rivers empty into the Taiwan Strait, only four major rivers flow into the Philippine Sea (North Pacific Ocean). With a total length of about 200 km, the Zhuoshui River, also spelled Choshui or Jhuoshuei River, is the longest river in Taiwan. Other major rivers are the Gaoping, the Tamsui and the Dahan, and the Zengwen.

Ecoregions
Taiwan has two ecoregions. Subtropical Evergreen Forests cover most of the island, including the interior, except for the southern tip where the ecoregion of the South Taiwan Monsoon Rainforest is located.
The South Taiwan Monsoon Rainforests ecoregion is characterized by great biodiversity due to its location between temperate and subtropical zones, its exposure to the monsoon, and large elevation differences (from sea-level mangrove forests to inland mountains).


Climate
The climate of Taiwan is mainly subtropical, except for the southernmost part, which is tropical. Summers are long and hot (May-September), winters are short and mild, with snowfall in the mountains. Taiwan has two rainy seasons: The northeast monsoon brings rain from the Taiwan Strait in winter, and the southwest monsoon from May to September, the time when tropical depressions (typhoons) can sometimes hit the island. 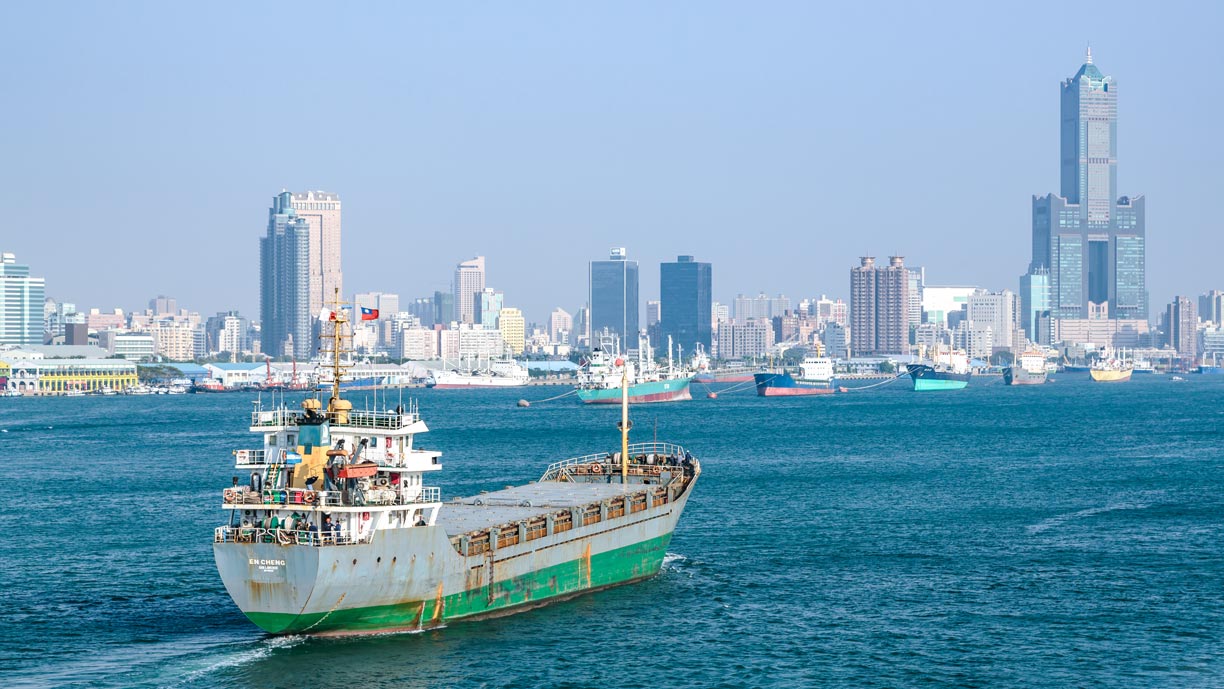 The harbor of Kaohsiung is Taiwan's largest international port. Kaohsiung City is located in southern Taiwan and is the third largest city in the country with a population of 2.8 million people.
Image: Uwe Aranas

Natural hazards
Taiwan's natural hazards include typhoons and associated heavy rains, floods, and landslides. Due to more than 40 active faults (tectonic plate boundaries), earthquakes are quite frequent on the island. In the southeastern part along the Central Mountain Range and the Hai'an Range between Hualien and Taitung City runs the Chihshang fault, one of the major collision zones between the Philippine Plate and Eurasian plate.

Environmental issues
Taiwan has the usual environmental problems of highly industrialized countries: water and air pollution, soil contamination and deforestation. The island nation also has problems with pollution from large industrial plants and facilities at estuaries and along coasts. Leaks from radioactive radiation have occurred in the past, but the government has committed to closing its four nuclear power plants by 2025.

The map shows the location of the following Taiwanese cities and towns: