Sunrise illuminating the rocky peaks of snow-free Mt. Kinabalu. Malaysia's highest mountain (at 4,095 m) is located in the center of the Malaysian state of Sabah, in the northern part of Borneo, the third-largest island in the world.
Image: ronykr

The map shows Malaysia, a country in Maritime Southeast Asia that consists of two parts, Peninsular Malaysia (West Malaysia) on the southern part of the Malay Peninsula and Malaysian Borneo (East Malaysia) on the northern third of the island of Borneo, the third-largest island in the world.

Peninsular Malaysia borders the South China Sea in the east and Singapore at its tip in the south.
It borders Thailand to the north and has a coastline on the Strait of Malacca, the strait between the Malay Peninsula and the Indonesian island of Sumatra to the west.

Malaysia covers a total area of 329,847 km², compared; the country is somewhat larger than Norway or slightly larger than the US state of New Mexico.

Multi-ethnic Malaysia has a population of 33 million people (2021). The largest population groups in Malaysia are Malays (60%), Chinese (20%) and Indians (6%).
The country is home to more than 130 living languages; the official language is Bahasa Malaysia (Melayu/Malay). The main spoken languages in Malaysia are Malay, Mandarin, Tamil, and some English, especially in tourist destinations.

Map of the two parts of Malaysia

You are free to use the above map for educational and similar purposes (fair use); if publishing, please credit Nations Online Project as the source. 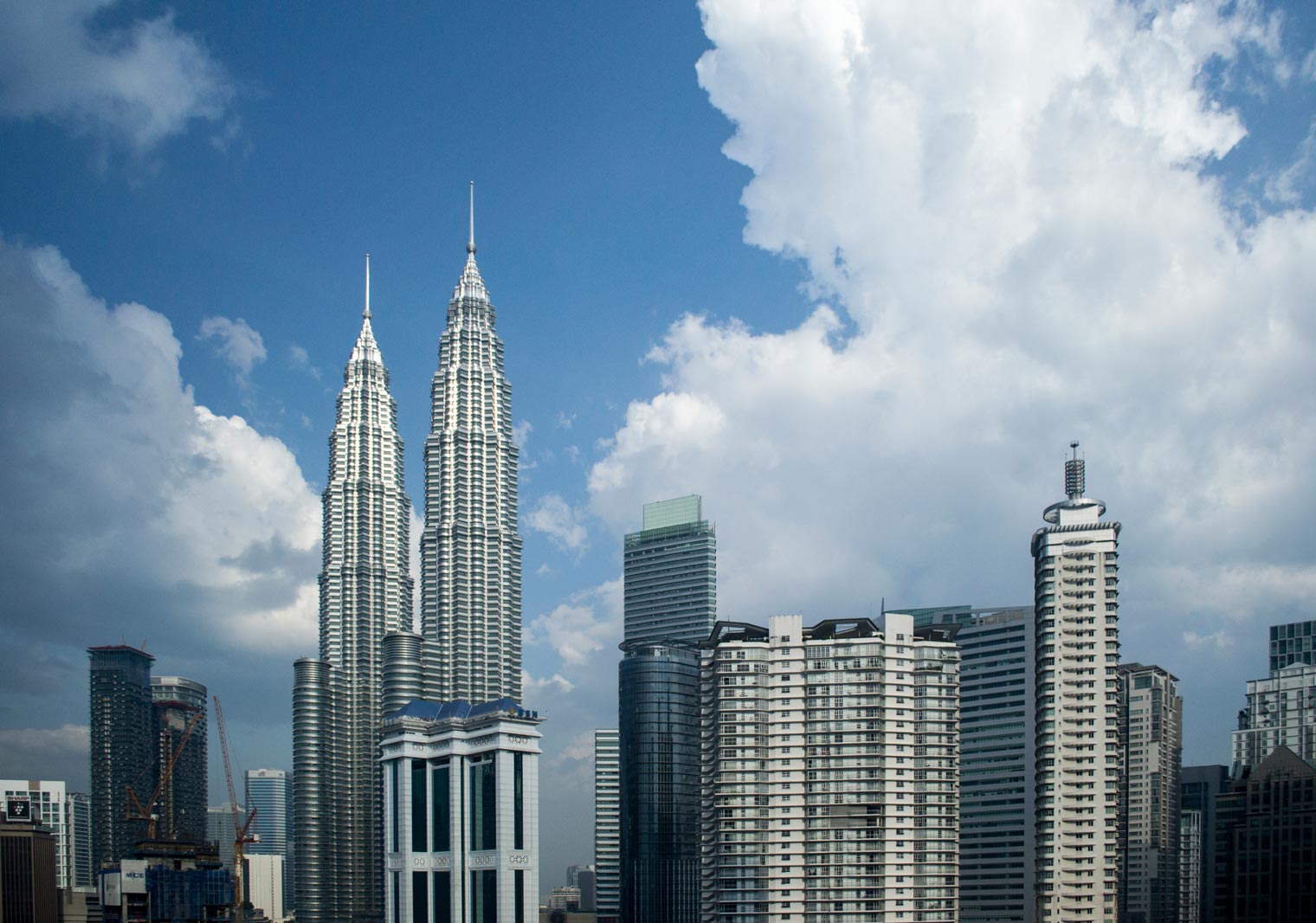 The Central Business District of Kuala Lumpur with the Petronas Twin Towers, the 21. century icon of Malaysia
Photo: kk. nationsonline.org

Kuala Lumpur, the capital of Malaysia and the largest urban agglomeration in the country, has a population of 7.5 million people.

Seberang Perai is a city in Penang state opposite Penang Island; the city is part of the Greater Penang Conurbation, the country's second-most populous metropolitan area.

George Town, the capital of Penang state, is among Malaysia's most populous cities.

Kajang, Klang, Shah Alam, Petaling Jaya, Selayang and Subang Jaya are densely populated urban areas in the Klang Valley; the cities are part of the Kuala Lumpur metropolitan area (Greater Kuala Lumpur) but are located in the state of Selangor.

Ipoh, the capital city of Perak state, is located about 200 km north of Kuala Lumpur on the Kinta River. The city has a population of about 800,000 people.

Johor Baru, the capital of the state of Johor, is the economic center of Johor; it is located at the lower end of the peninsula on the Strait of Johor, opposite Singapore.

Iskandar Puteri is the southernmost city of the Malay Peninsula; it forms a large urban agglomeration together with other cities adjacent to Johor Bahru.

Seremban is a city southeast of Kuala Lumpur and the capital of the state of Negeri Sembilan.

Malacca City (also spelled Melaka) is the capital of the coastal state of Malacca, in southwestern Malaysia. The oldest Malaysian city on the Straits of Malacca has been a port and trading city for several hundred years.

Melaka and George Town, Historic Cities of the Straits of Malacca are a UNESCO World Heritage Site.


Mountains
The highest mountain on the Malay Peninsula is Mount Tahan (at 2,187 m). The highest peak in Malaysia is Mount Kinabalu (at 4,095 m), located in the State of Sabah on Borneo, close to the island's northern tip. The mountain and the Kinabalu Park surrounding it are a UNESCO World Heritage Site.

Putrajaya, the planned city was founded in 1995 and is located about 25 km south of Kuala Lumpur; it serves as the new administrative center of the federation.

Labuan, the territory consists of the island of Pulau Labuan and six smaller islands off the coast of Borneo in East Malaysia.

The map shows the 13 States of Malaysia.
Image: nationsonline.org

Johor
The State of Johor (Johore) occupies the southern part of the south of the Malay Peninsula. The capital is Johor Bahru. The Johor–Singapore Causeway links the city of Johor Bahru across the Straits of Johor to Singapore.

Kedah State
The State of Kedah is located in the northwest of Peninsular Malaysia; it borders Thailand and includes the Langkawi Archipelago. The capital is Alor Setar. The royal capital is Anak Bukit.

Kelantan
The State of Kelantan is located in the north-eastern corner of Peninsular Malaysia; it borders Thailand in the north. The capital is Kota Bharu.

Malacca
The historic city-state of Malaysia is located in the southwestern region of the Malay Peninsula, on the Strait of Malacca.

Pahang
The State of Pahang is a sultanate and a federal state of Malaysia located in the center of the peninsula. The capital is Kuantan. Kuantan Port is a major maritime gateway to the east coast region of the peninsula.

Penang
Penang is located on the northwest coast of Western Malaysia and includes Penang Island. The state capital is George Town on the Island. Two bridges link Penang Island to the mainland.

Perak
The State of Perak is located on the west coast of the Malay Peninsula. The capital city is Ipoh.

Perlis
The smallest state in Malaysia is Perlis. It shares an international border with Thailand. The capital is Kangar.

Sabah
The State of Sabah occupies the northern part of the island of Borneo. The capital and largest city is Kota Kinabalu.

Sarawak
The State of Sarawak stretches along Borneo's northwest coast. The capital and largest city is Kuching.

Selangor
The State of Selangor is located on the west coast of Peninsular Malaysia on the Strait of Malacca.
The capital is Shah Alam. The royal capital is Klang.

Terengganu
The State of Terengganu (Trengganu) is a sultanate located on the east coast of Peninsular Malaysia. The royal capital is Kuala Terengganu.

Malaysian cities and towns on the map

Searchable map/satellite view of the city of Johor Bahru