The Wawel Royal Castle complex was first built by King Casimir III the Great on the left bank of the Vistula River in Krakow, the former capital of Poland. For centuries the castle was the residence of Polish kings and the symbol of Polish sovereignty.
Photo: Jar.ciurus

The map shows Poland, a country in central-eastern Europe with a coastline on the Baltic Sea. It borders seven countries, Belarus, Czechia, Germany, the Kaliningrad Oblast, an exclave of Russia, Lithuania, Slovakia and Ukraine. The country also shares maritime borders with Denmark and Sweden.

Poland, officially the Republic of Poland, has been a member of the European Union since 2004 but is not part of the Eurozone (they do not use the euro as their official currency). If you are in Poland, you pay with Polish złoty.

The country is divided into 16 voivodships (provinces), which largely correspond to the historical regions of the country.

With an area of 312,685 km², Poland is about half the size of the Iberian Peninsula (Spain/Portugal) or slightly smaller than the US state of New Mexico.

Poland has a population of 38.15 million people (in 2021); the capital and largest city of the country is Warsaw (Polish: Warszawa), the largest metropolitan area is around Katowice urban area. The official language is Polish. The main religion is Christianity; about 86% of Poles are Roman Catholic. 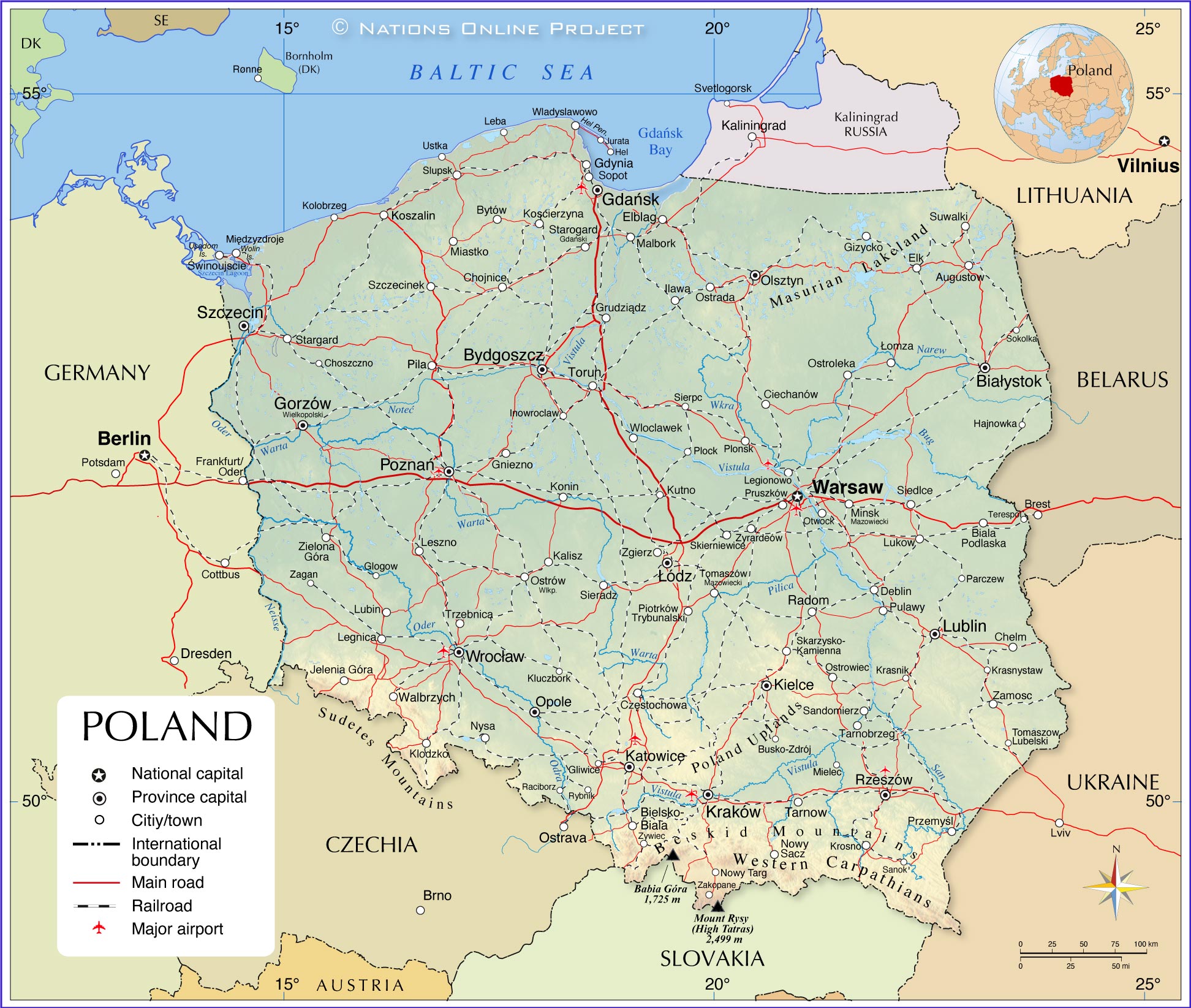 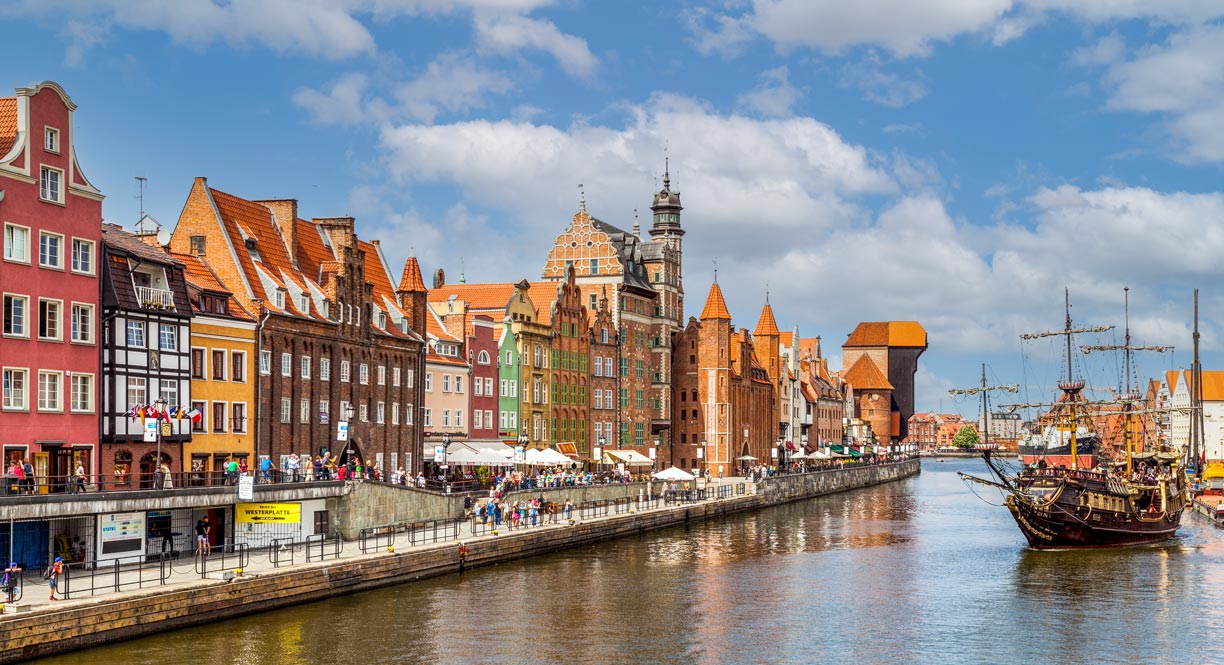 The Motlawa River embankment, Długie Pobrzeże, the Long Waterfront, is the promenade along the west bank of the Mołtawa River in Gdansk, Poland's chief port. In the background is the Krantor crane (Brama Żuraw), the largest medieval port crane in Europe.
Image: Diego Delso

Major geographic regions of Poland are

Poland is largely a flat affair. Only in the south along its border to Czechia and Slowakia, there are some mountains which can be over 2000 m high. The mountain range is known as the High Tatras. Poland's highest mountain is the Rysy, with 2,499 m.
The Masurian Lake District in the northeast of the country consists of a large number of lakes in a moraine landscape. The approximately 52,000 km² lakeland was formed by glaciers during the Pleistocene, its many lakes are remnants of the melted glaciers dammed up by moraines (glacial till).


Poland's coasts
Poland borders the Baltic Sea in the north. Its 400 km long coast (not counting the lagoons) is mainly fringed with sandy beaches and dunes. Popular beach towns are Sopot, Gdynia, Hel and Jurata on the Hel Peninsula, Leba, Ustka, Kolobrzeg and Rewal. 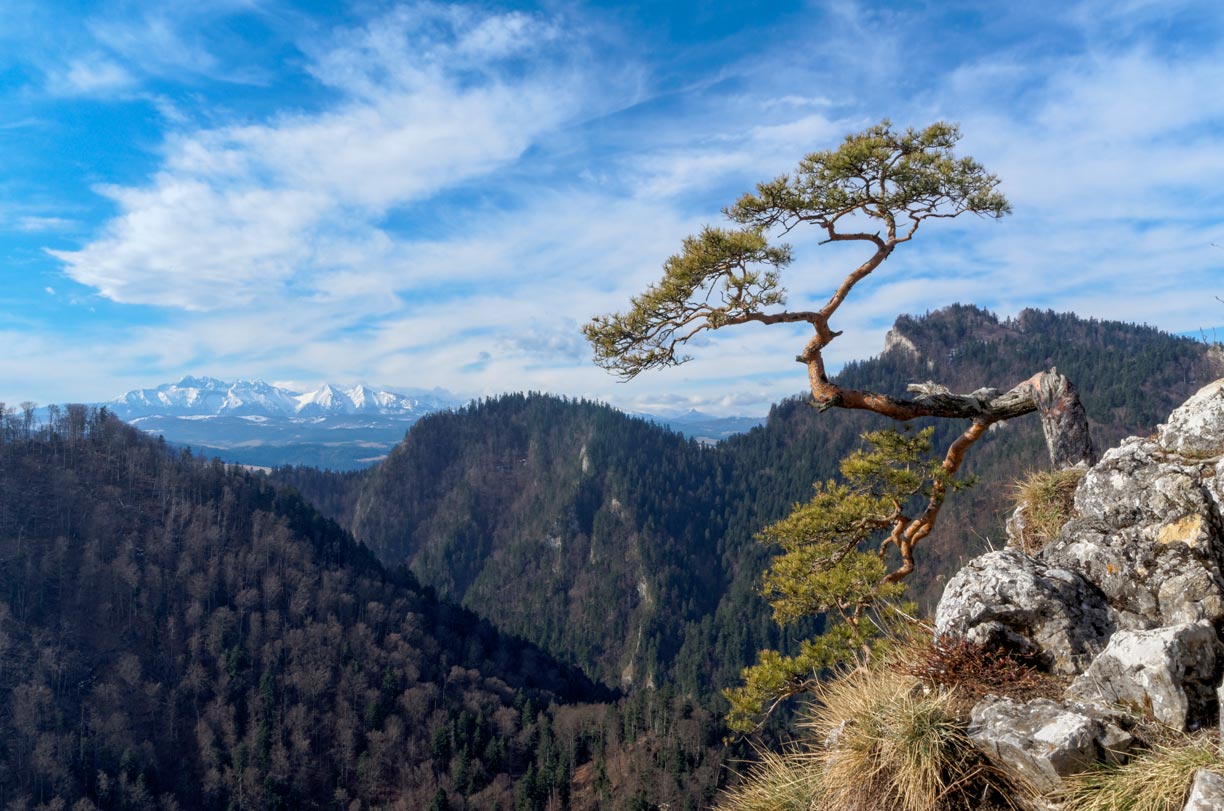 The snow-capped peaks of the Tatra Mountains, seen on a clear day from Mount Sokolica.
Photo: Jakub Hałun

Poland's mountains
As mentioned above, Poland is flat. Most of its territory lies in the fertile North European Plain. The flat or gently undulating lowlands were formed during the last glacial periods when the melting Scandinavian ice sheet retreated toward the Arctic. The ice also created the Baltic Sea. At the edges of the former inland ice, the mountains were largely spared abrasion by the glaciers.
These areas are the gently sloping foothills of the Sudetes and Carpathian mountain ranges, the Lesser Poland Uplands, with the Łysica as the highest point (604 m). The Sudetes mountain range with Mount Śnieżka at 1,603 m. The Sudetes range is separated from the Carpathians in the east by the Moravian Gate, a depression between the two mountain ranges. Within the Carpathians lie the High Tatras with Poland's highest mountain, the Rysy (at 2,499 m).


Rivers
All major rivers in Poland flow into the Baltic Sea. They flow into either the Vistula (Polish: Wisła) or the Oder (Polish: Odra), the two main rivers of Poland. The Vistula is Poland's longest river (1,047 km (651 mi)); its source is on the western slope of the Barania Góra mountain in the Silesian Beskids range. The Odra River rises on the slopes of the Eastern Sudetes in Czechia and flows for 742 km (460 mi) through western Poland. Together with the Lusatian Neisse, the rivers form a long section of the Polish-German border, the Oder-Neisse line, before flowing into the Baltic Sea.


Polish Voivodeships
Poland is divided into 16 voivodeships (provinces, palatinates or regions), which essentially correspond to the historical regions of the country. The voivodeships are (capitals (administrative seats) in round brackets) 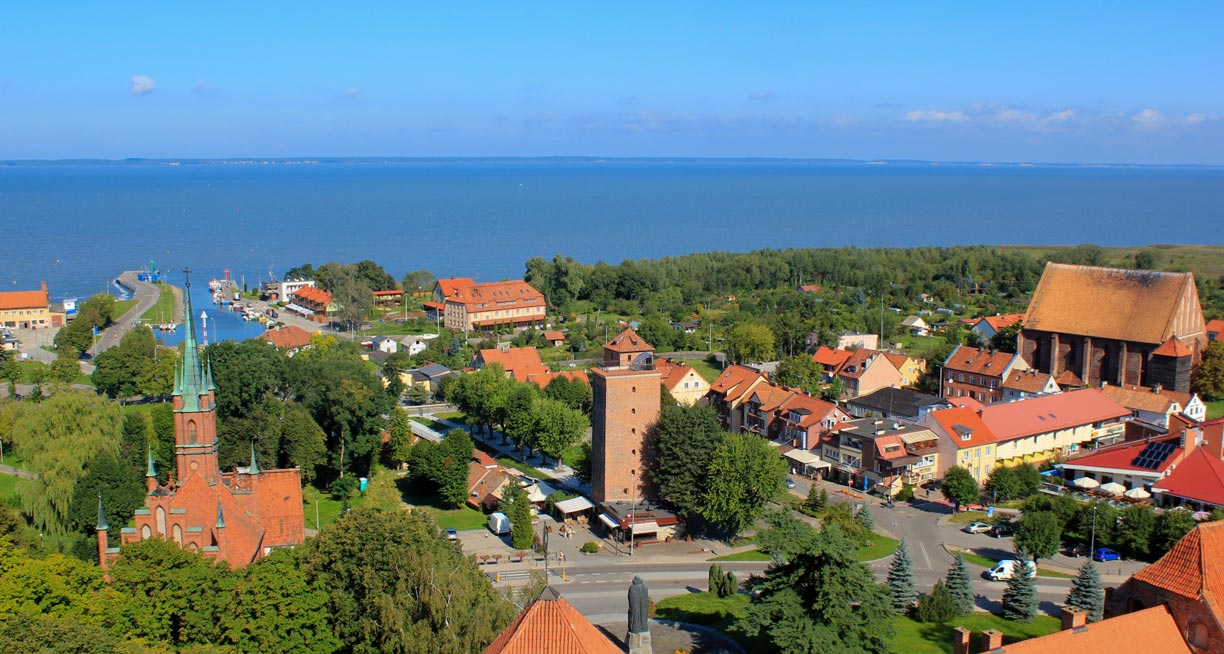 View of Frombork, a city in northeastern Poland near the border with the Russian Kaliningrad Oblast. The city is located on the Vistula Lagoon in the Warmia-Masuria Voivodeship.
Photo: Julian Nyča 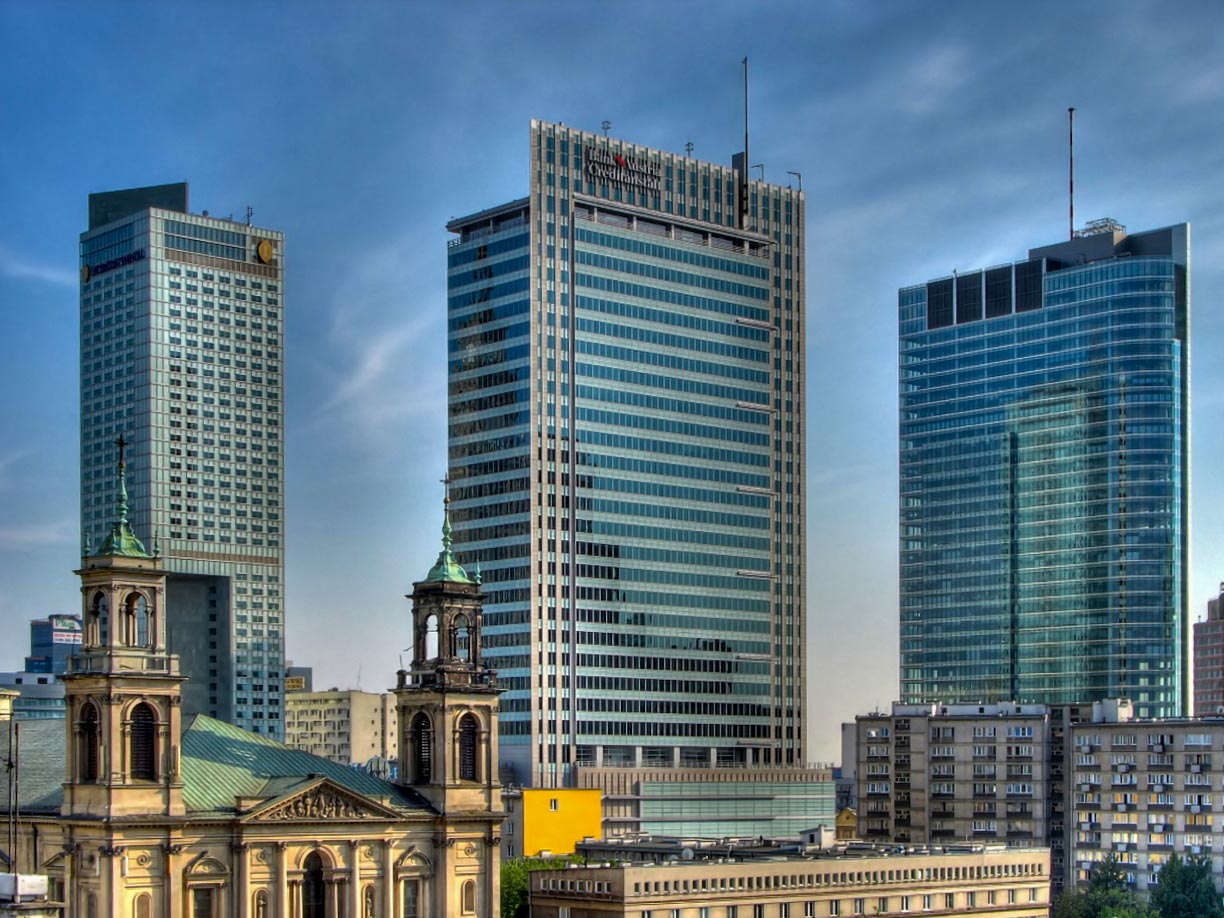 New and old places of worship in Warsaw's Central Business District. The bell towers of the All Saints Church and the headquarters of Bank Austria Creditanstalt Poland SA.
Photo: DocentX

Other international airports are:

Natural resources of Poland
Some of Poland's mineral resources, such as zinc, lead and rock salt, have been mined since the 11th and 12th centuries. The country also has significant reserves of hard coal and lignite (soft coal); Poland has one of the largest lignite reserves in the European Union. The largest coal deposits are located in Upper Silesia.
The first rock oil ("petro-oleum") mine was built in Bóbrka, near Krosno in Poland.


Natural hazards
Most disasters with fatalities in Poland are caused by people, e.g., airplane crashes, mine accidents, railroad accidents, gas explosions, refinery fires, train and bus accidents. [WP]
Among the natural hazards in Poland are rare tornado outbreaks, storms and floods. In 1997 and in June 2021, a series of storms brought flash flooding to parts of Poland and other European countries.


Environmental issues
Poland remains one of the most material- and energy-consuming economies of the European Union (EU) in terms of efficiency. The country's main environmental problems are industrial waste caused by mining, quarrying and processing industries, and air quality; exceeding the target values for tropospheric ozone in summer and exceeding the limits for PM10, PM2.5 and benzo(a)pyrene in winter continue to be serious problems. [EEA]

The map shows the location of the following cities and towns in Poland:

Satellite View and Map of Warsaw

Satellite View and Map of Poland