Sri Lanka and its Provinces

The Democratic Socialist Republic of Sri Lanka (known as Ceylon until 1972) is located in the Indian Ocean between the Laccadive Sea in the west and the Bay of Bengal in the east, separated by the Palk Strait and the Gulf of Mannar from Tamil Nadu, an Indian state on the southern coast of the Indian subcontinent.

Colombo was the national capital until 1978 when the administrative offices moved to Sri Jayawardenepura Kotte, a suburb of Colombo. Colombo is now the executive and legislative capital and also the commercial center of the country. 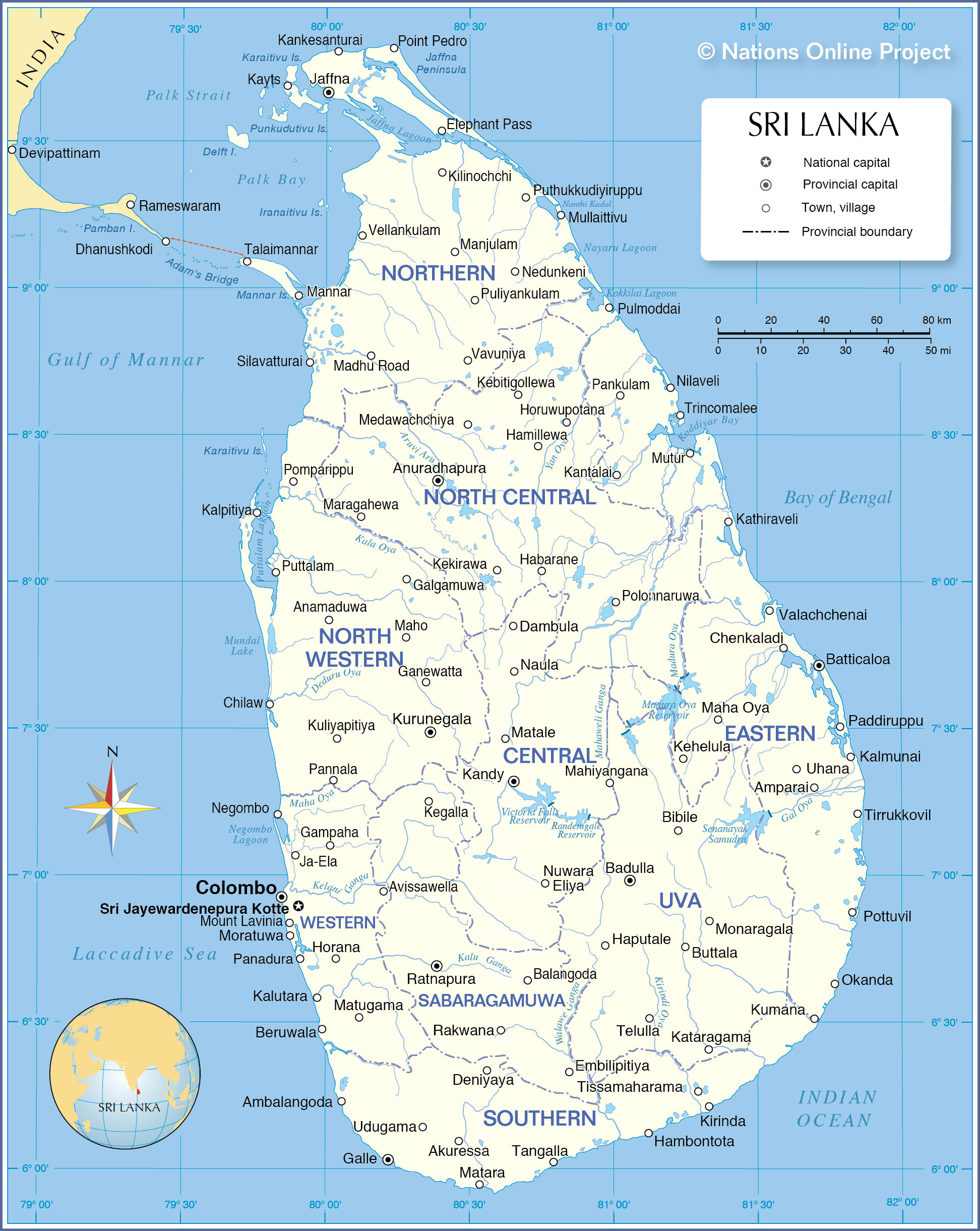 You are free to use above map for educational purposes, please refer to the Nations Online Project.
Bookmark/share this page


Northern Province
Sri Lanka's northernmost province includes the Jaffna Peninsula, the capital city is Jaffna with a population of about 90,000 inhabitants. Before the 26-year long Sri Lankan civil war, Jaffna was the country's second most populated city.

North Central Province is sparsely populated, its capital is Anuradhapura, the Sacred City of Anuradhapura

is a UNESCO World Heritage Site: Anuradhapura "a Ceylonese political and religious capital that flourished for 1,300 years, was abandoned after an invasion in 993. Hidden away in dense jungle for many years, the splendid site, with its palaces, monasteries, and monuments, is now accessible once again."

The Eastern Province (Næ̆gĕnahira) stretches along the eastern coast of the island at the Bay of Bengal (Indian Ocean). Characteristic features of the coastline are lagoons and inlets; the largest city is Kalmunai, a Muslim-majority municipality in the country. The province capital is Trincomalee, a major port city with a population of about 100,000 inhabitants. Trincomalee is one of the major centers of Tamil culture and language. One of the city's main attraction is the Temple of the Thousand Pillars, the Koneswaram, the most famous Hindu temple in the country, devoted to Shiva in the form of Kona-Eiswara (Konesar). The temple is built atop Swami Rock, a rocky promontory cape overlooking Trincomalee and the Indian Ocean.

The North Western Province (Wayamba) offers a rural landscape with coconut plantations and domestic wildlife in three parks/sanctuaries (part of Wilpattu National Park, Kahalla-Pallekele Sanctuary and Mundel Bird Sanctuary). There are stretches of sandy beaches with peaceful lagoons and the remains of four medieval capitals of Sri Lanka: Panduwasnuwara, Dambadeniya, Yapahuwa, and Kurunegala. The largest city and capital is Kurunegala, a major commercial and transportation hub in the region. 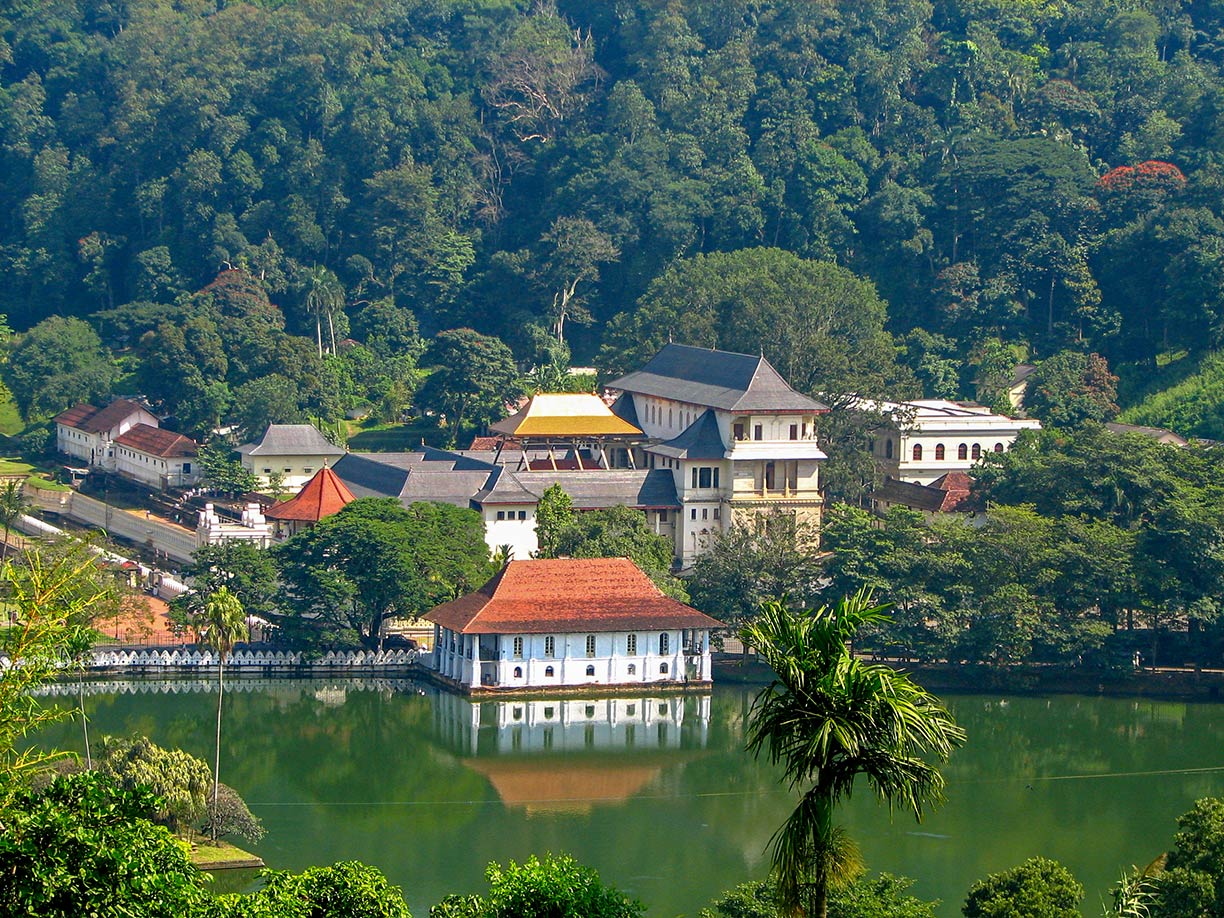 The Temple of the Tooth in Kandy, another temple that contains a tooth of the Buddha.
Photo: McKay Savage


The Central Province in the center of the country is a mountainous region; it produces much of the famous Ceylon tea. Sri Lanka's highest peak Mount Pidurutalagala, (Mount Pedro; 2,524 m), is located here, close to the city of Nuwara Eliya. The Central Province is also a major tourist destination because of its picturesque landscapes and temperate climate and its hill station towns of Kandy, Nuwara Eliya, and Gampola. The largest city and capital of the province is Kandy, known as one of the most scenic cities in Sri Lanka. The Sacred City of Kandy

is a UNESCO World Heritage site since 1988, described as: "This sacred Buddhist site was the last capital of the Sinhala kings whose patronage enabled the Dinahala culture to flourish for more than 2,500 years until the occupation of Sri Lanka by the British in 1815. It is also the site of the Temple of the Tooth Relic (the sacred tooth of the Buddha), which is a famous pilgrimage site."
Also in Central province lies the Ancient City of Sigiriya

another UNESCO World Heritage site. The ruins of the capital built by the King Kassapa I (477–95) lie on steep slopes and at the summit of a granite peak (the 'Lion's Rock') standing some 370 m high. A series of galleries and staircases emerging from a constructed mouth of a gigantic lion, provide access to the site. 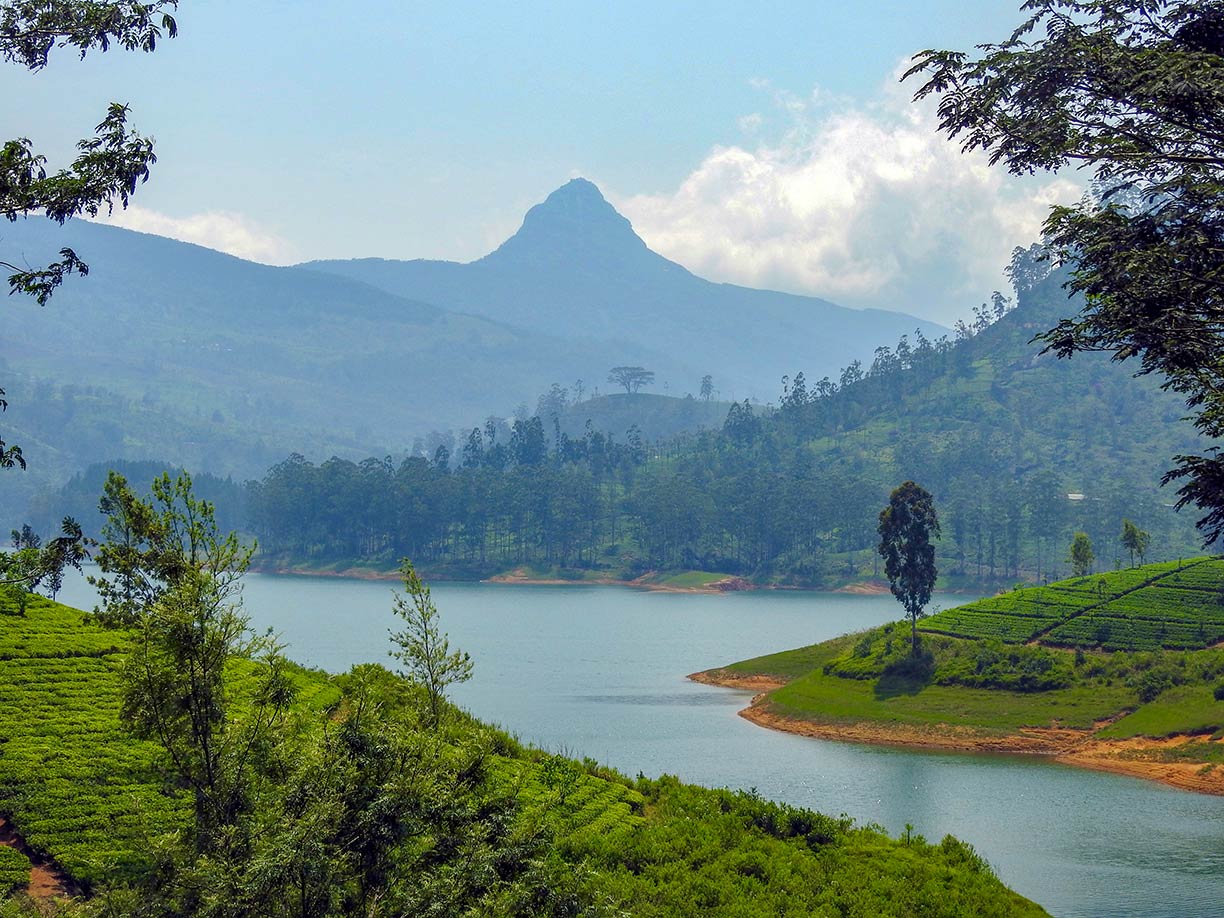 Sabaragamuwa is a landlocked province in the southwest interior of the island, the largest city and capital is Ratnapura, one of the major cities in Sri Lanka. Ratnapura is the center of a long-established industry of precious stone mining including rubies, sapphires, and other gems.
Sabaragamuwa province is also a popular tourist destination. Sinharaja Forest Reserve

is a national park and a UNESCO World Heritage Site; it is the country's last viable area of primary tropical rainforest. Udawalawe National Park lies on the boundary of Sabaragamuwa and Uva Provinces; it is a wild animal sanctuary and a vital habitat for water birds and Sri Lankan Elephants. Sri Pada (also known as Adam's peak; 2,243 m) dominates the southern reaches of the Central Highlands, the tall conical mountain near the town of Hatton is revered by Buddhists, Hindus, Muslims, and Christians as a holy site. By the way, the Central Highlands of Sri Lanka

is another World Heritage Site. 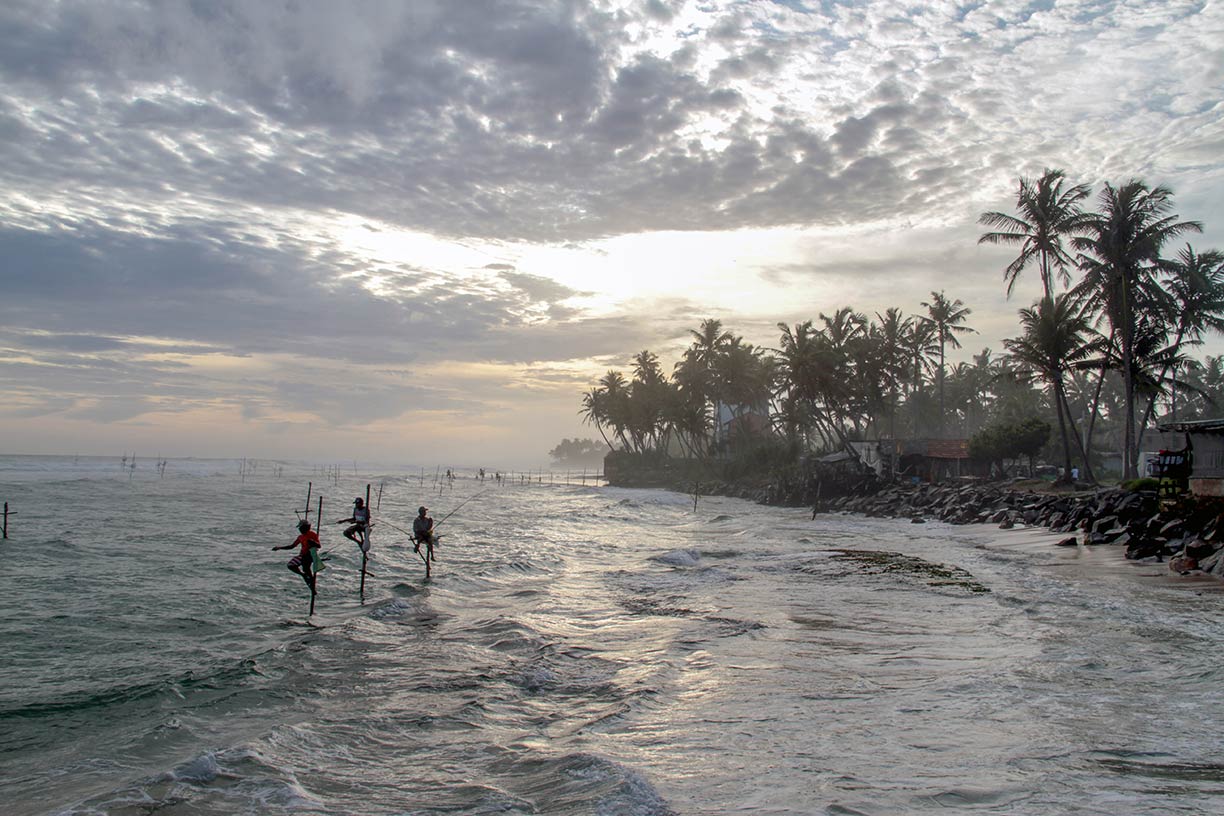 Stilt fishermen sitting on poles at the beach of Galle in the Southern Province of Sri Lanka.
Photo: Yves Picq


Uva is a landlocked province in the southeastern interior of the island; its capital city is Badulla. Major tourist attractions in Uva are the Yala National Park (partly also in Southern and Eastern Provinces). Yala is the second largest national park in Sri Lanka and the most visited, there are 44 species of mammals resident in Yala National Park, including Sri Lankan Elephants. Gal Oya National Park and its associated protected areas (partly in the Eastern Province), its herd of elephants can be seen throughout the year.

The Southern Province is the country's southernmost province; it is an agricultural region, farming and fishing are the primary sources of income for the majority of the people. The largest city, a seaport, and the capital of the province is Galle. The city is located on the southwestern tip of Sri Lanka; it has a population of about 100,000 people. The Old Town of Galle and its Fortifications

is another one of Sri Lanka's eight World Heritage Sites, described as "the best example of a fortified city built by Europeans in South and South-East Asia, showing the interaction between European architectural styles and South Asian traditions."

More about Sri Lanka and the US

Satellite View and Map of Colombo