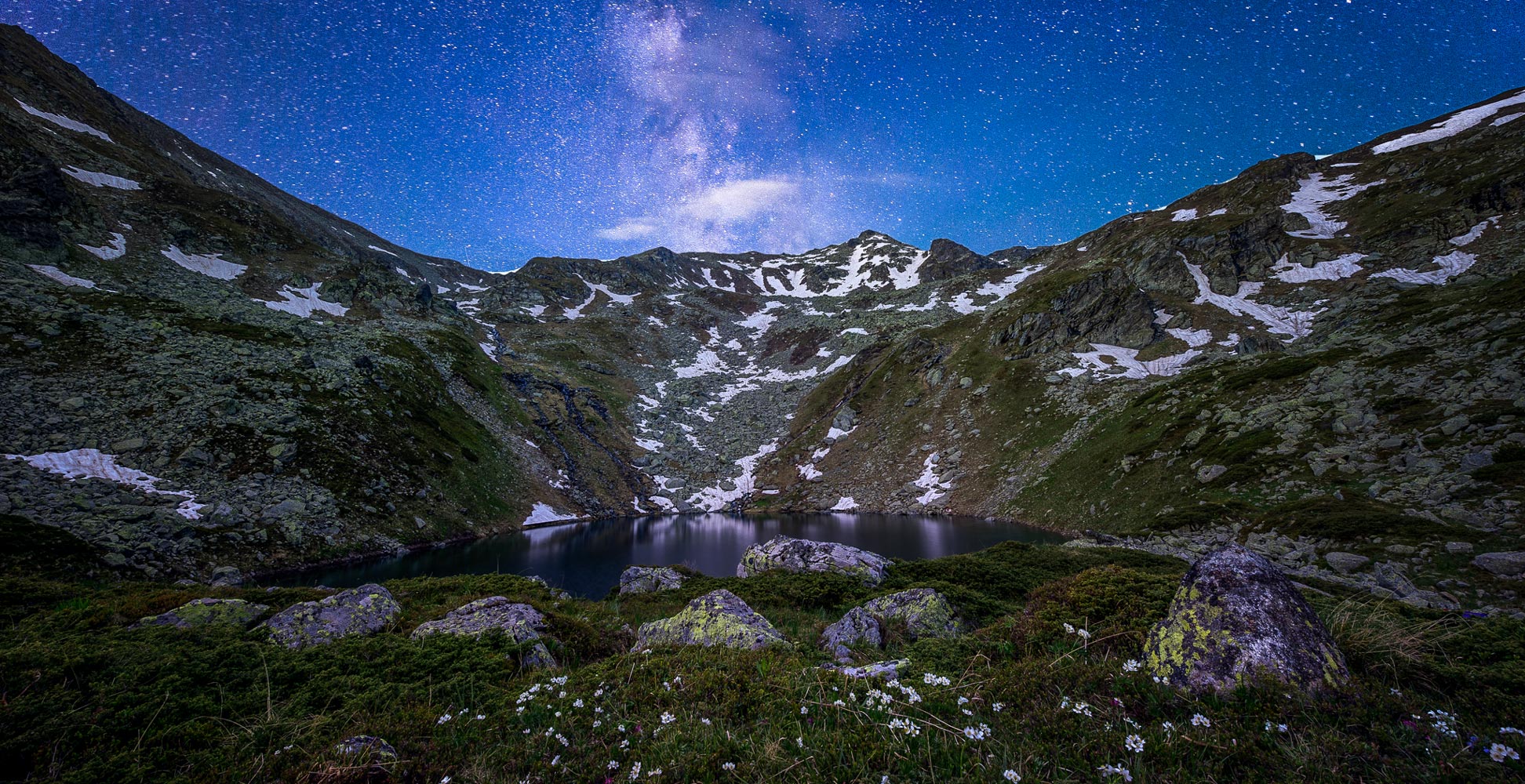 Lake Jazhincë is a mountain lake in Kosovo, located in the eastern part of the Šar Mountains. The lake is located 2,180 m above sea level, just below the peak of Peskovi, which reaches an altitude of 2,651 m.
Image: Burim Muqa 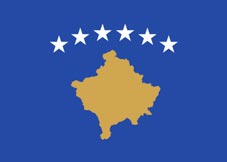 The map shows Kosovo, a landlocked country in the Balkans in Southeastern Europe. It is surrounded by (clockwise) Albania, Montenegro, Serbia and North Macedonia.

The country occupies an area of 10,887 km², making it somewhat larger than Cyprus (island) or slightly larger than the US State of Delaware.

The former autonomous province of Serbia has a population of 1.8 million people (in 2021); the majority are of Albanian descent (90+%). The capital and largest city is Pristina. Spoken languages are Albanian and Serbian. The majority of (Albanian) Kosovars are Sunni Muslims (more than 97%). 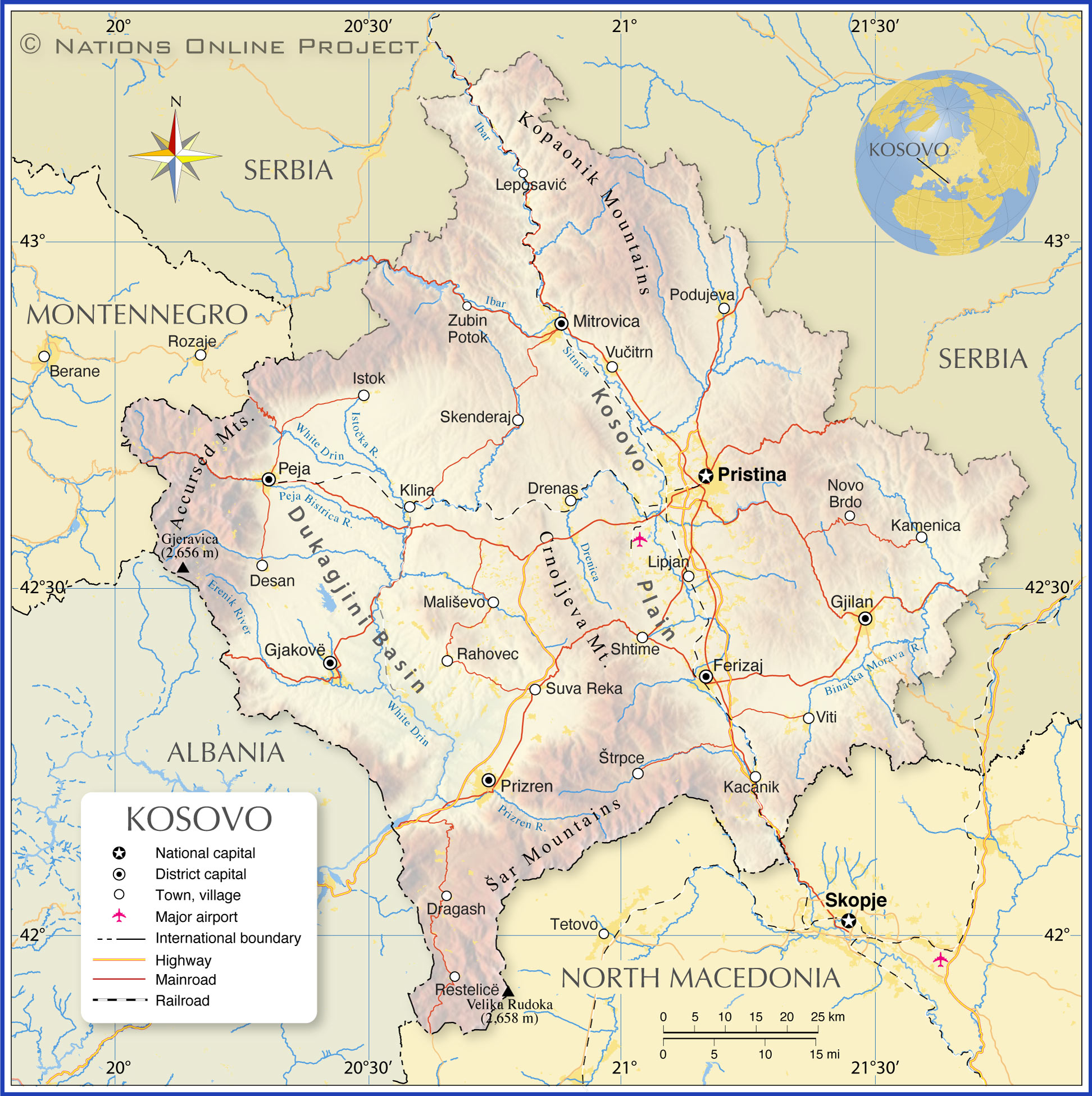 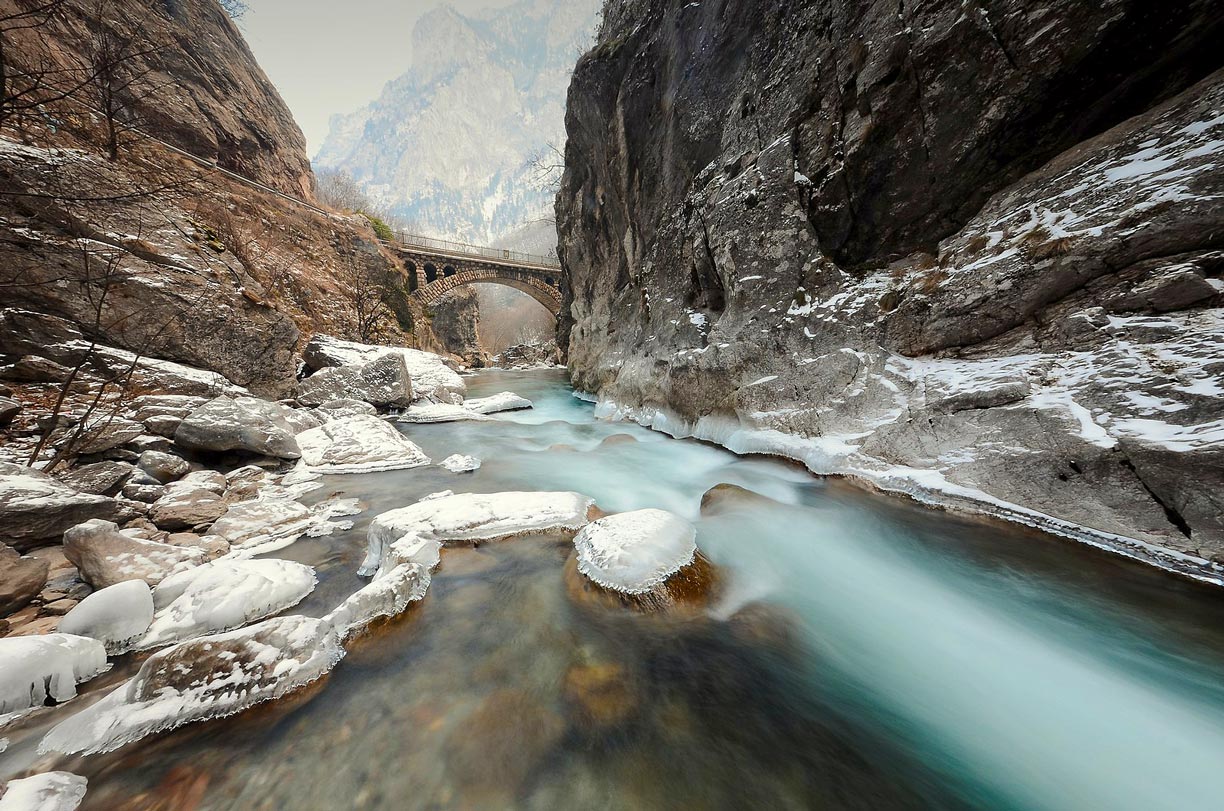 A time exposure of the Peja Bistrica river in the Rugova Canyon with the Rugova Canyon Bridge in the background. The approximately 25 km long river gorge in Western Kosovo is located west of the town of Peja in the Accursed Mountains (Albanian Alps) near the border to Montenegro.
Photo: Gashi Bujar

Kosovo's landscape is mountainous along most of its borders. The mountains and valleys are part of the Dinaric Alps, the massive mountain range that runs parallel to the Adriatic coast, separating the interior of the Balkan Peninsula from its coastal areas in the west.

Relief
The two hilly central plains with average altitudes between 450 and 550 m above sea level are Dukagjini (Metohija) region in the west and the Kosovo Field (Kosovo polje) in the east. The north-south running Crnoljeva Mountains separate the two plateaus.

To the north of the Crnoljeva Mountains is the Drenica Valley. In the southwest, the Sharr Mountains (Šar) dominate the landscape along Kosovo's border with North Macedonia. The mountain range features several peaks that reach altitudes of more than 2,500 m.
Along the southern border with Albania are the foothills of the Albanian Alps, the Koritnik and Gjallica Mountains.

The western border region of Kosovo with Montenegro is nicely decorated with the Accursed Mountains. The landscape offers isolated mountain villages, forest trails, a ski resort at Bogë and the highest peak in Kosovo, Gjeravica, with a prominence of 1,018 m and a total elevation above sea level of 2,656 m.
In the northern part of Kosovo, northeast of the district capital Mitrovica stretches the Kopaonik mountain massif. Its highest point at 2,017 m ist Pančić's Peak. In the Serbian part of this mountain range is the FIS-recognized ski resort Kopaonik.

Rivers and Lakes
Kosovo's mountainous landscape is the source of several rivers which empty into three seas, the Adriatic and the Aegean Seas (both part of the Mediterranean Sea) and the Black Sea. Some of Kosovo's, relative short, rivers are Morava, Erenik, Ibar, White Drin (the longest river - 122 km), Binačka Morava and Sitnica River.

The map shows the location of the following cities and municipalities in Kosovo:

The capital of Kosovo is Pristina.