Satellite View and Map of the City of Sydney, Australia

Panorama view of Sydney at dusk with Sydney Opera House on the left.
Image by: Diliff

The satellite view and map show Sydney, a chief port and the capital of New South Wales, a state on the south-east coast of

Australia. The possibly most famous Australian city internationally is located on the coast of the Tasman Sea, an arm of the South Pacific Ocean.

Sydney is known as the Harbour City; it sprawls around Port Jackson, a river catchment and coastal inlet of the Tasman Sea with numerous bays, estuaries, - and harbors. The fractal-shaped bay is home to the waters of Sydney Harbour, the Middle Harbour, and the North Harbour; the Parramatta and the Lane Cove rivers empty into the bay.

Australian Aborigines inhabited the Sydney basin since the Late Stone Age. The arrival of the HM Bark Endeavour, commanded by British military explorer James Cook at Botany Bay in 1770 changed the continent forever.

It was the first recorded European contact with the eastern coastline of Australia. To be on the safe side, Cook carried out his duty and first thing in the morning he claimed the east coast of Australia for the British Crown and named it New South Wales.

18 years later eleven British ships (the First Fleet) arrived at Port Jackson to establish a penal colony at Sydney Cove on the clan lands of the Gadigal people. The newly independent United States didn't want British convicts anymore, so the British King had to find a place somewhere else to send undesirable criminals.[1]
And so the settlement of Sydney became the capital of the British colony ruled by governors appointed by the Australian monarch (actually the British King George III). The first elected city council was established in 1842, in the same year Sydney was incorporated as a city.[2] The University of Sydney, Australia's first university, was founded in 1850.
The gold rush of 1851 transformed from the city from a colonial outpost into an important cultural and economic center.


Today Sydney is Australia's version of a metropolis with an estimated population of more than 5 million people. It is the country's most populous, most cosmopolitan city, a melting pot with more than 250 spoken languages. Nearly 40% of the Sydneysiders speak a non-English language at home.

According to GaWC, Sydney is ranked as an Alpha World City, downgraded from its A+ ranking in 2008. It was #8 in National Geographic's 2010 Top 10 List of Beach Cities. 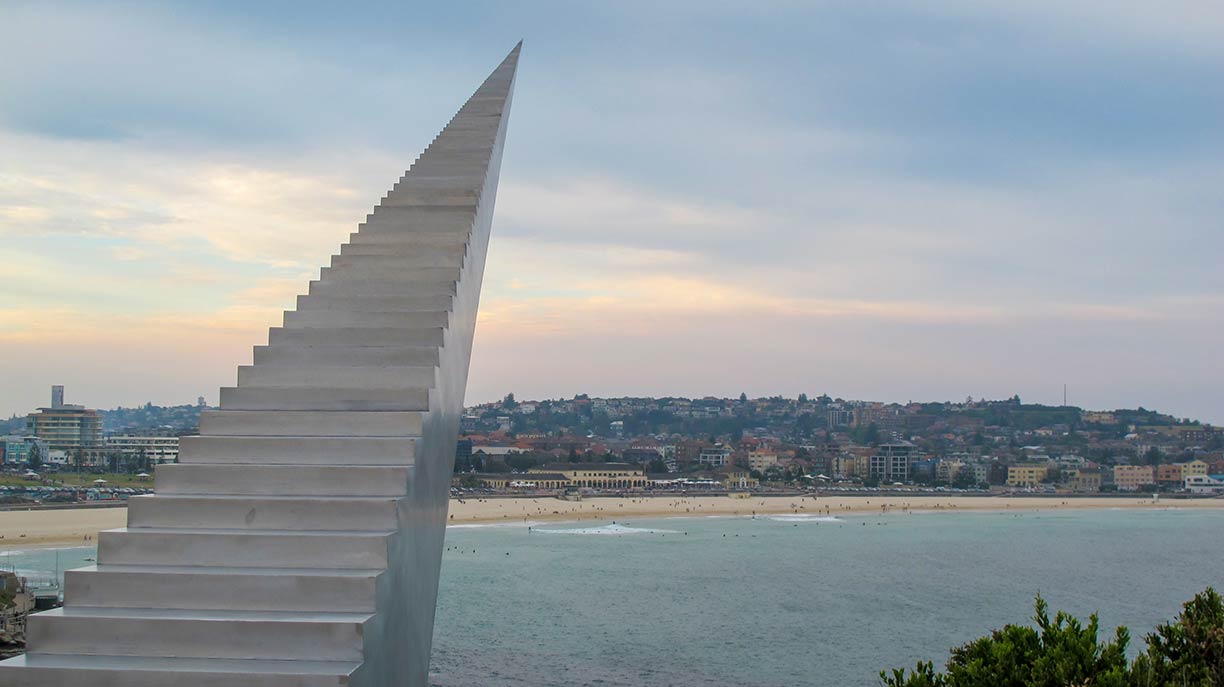 Sydney Harbour Bridge,
there is a pedestrian-only footway on the east side of the bridge.

Darling Harbour and Darling Square (www.darlingharbour.com), Darling Harbour is an inlet of Sydney Harbour, a large recreational and pedestrian area adjacent to the city center. The newly established business and residential precinct is the outcome of the redevelopment around Sydney Harbour.

Circular Quay, the harbor on the northern edge of Sydney's CBD is a popular recreational area and consists of walkways, pedestrian malls, parks, and restaurants. It is served by a number of ferry quays, bus stops, and a train station.

Luna Park (www.lunaparksydney.com), an amusement park with a history.[3]

Hyde Park Barracks, Hyde Park Barracks was a prison to house convict men and boys, it opened in 1819. It is one of the thousands penal sites established by the British Empire on Australian soil in the 18th and 19th centuries.[4] Eleven of the surviving prisons became a UNESCO World Heritage Site in 2010 (Australian Convict Sites

Royal Botanic Gardens, large botanic garden in the heart of Sydney; it was Australia's first scientific institution, opened in 1816. Despite poor soil, inadequate water and a shortage of funds, the garden has played a significant role in the acclimatization of plants from other regions.

Bondi Beach, Sydney's Copacabana is a famous crescent-shaped beach in Sydney's most densely populated suburb, at the southern end of Bondi Beach is the Bondi Icebergs Pool, the legendary 50-m saltwater pool directly adjacent to the sea. Sculpture by the Sea (sculpturebythesea.com), is an annual sculpture exhibition, works are on display across the cliff from Bronte Beach to Bondi Beach.

Just zoom in (+) to see the Sydney Opera House (located at Sydney Harbor), it is one of the world's most distinctive buildings of the 20th century and Sydney's most famous landmark. The Opera is a UNESCO World Heritage Site since 28 June 2007.

The Map shows a city map of Sydney with expressways, main roads, and streets; zoom out to find the location of Sydney Airport (IATA Code: SYD), located at Botany Bay in the suburb of Mascot, about 12 km by road (via M1) south of Sydney's Central Business District.


Countries and territories of Australia/Oceania