View of the Alpstein massif. Each peak has its own name (left to right): Neuenalpspitz, Gmeinenwis, Lütispitz, Stöllen, Stoss, Säntis, Wildhuser Schafberg, and Zehenspitz. The highest peak of the Alpstein massif is the Säntis with 2,502 m (8,209 ft) and a prominence of 2,021 m. The mountain range is located on the territories of the Swiss cantons of Appenzell Innerrhoden, Appenzell Ausserrhoden and St. Gallen.
Image: Hcrm 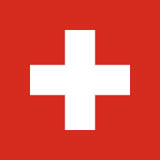 With an area of 41,285 km², the country is just slightly smaller than the Netherlands or almost twice the size of the US state of New Jersey.

Switzerland has a population of 8.6 million people (in 2019). Spoken languages are German, French, Italian and Romansh, plus English, for business and tourism.

Switzerland is a confederation of 23 states (cantons) and 3 "split cantons" of two half-cantons each, Basel, Appenzell, and Unterwalden.

The cantons are the federal states of the Swiss Confederation. Each canton has its own constitution, government, legislature and judiciary. The de facto capital of Switzerland is Bern (Berne), referred to by the Swiss as "federal city," or Bundesstadt (in German), or Ville fédérale (in French). 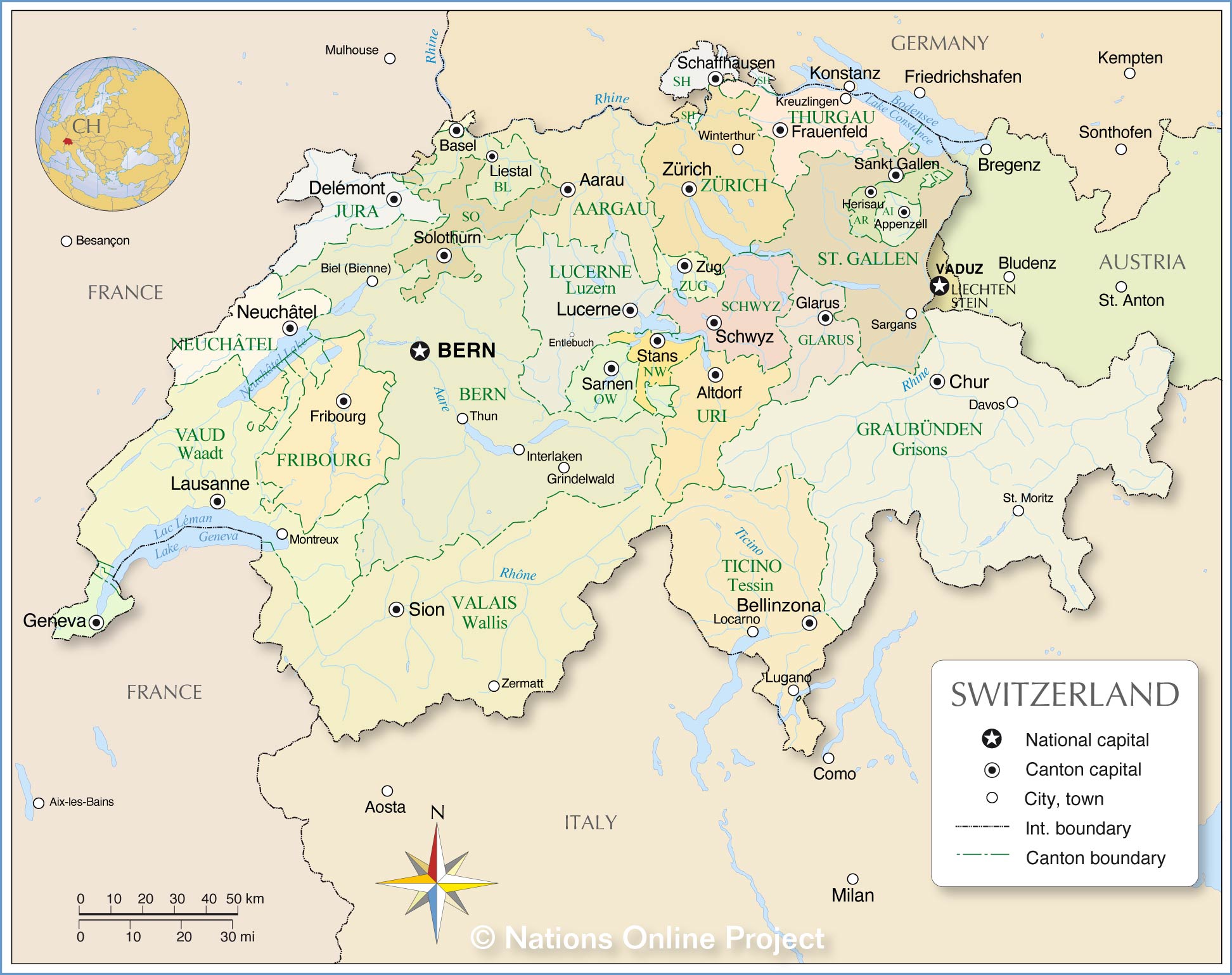 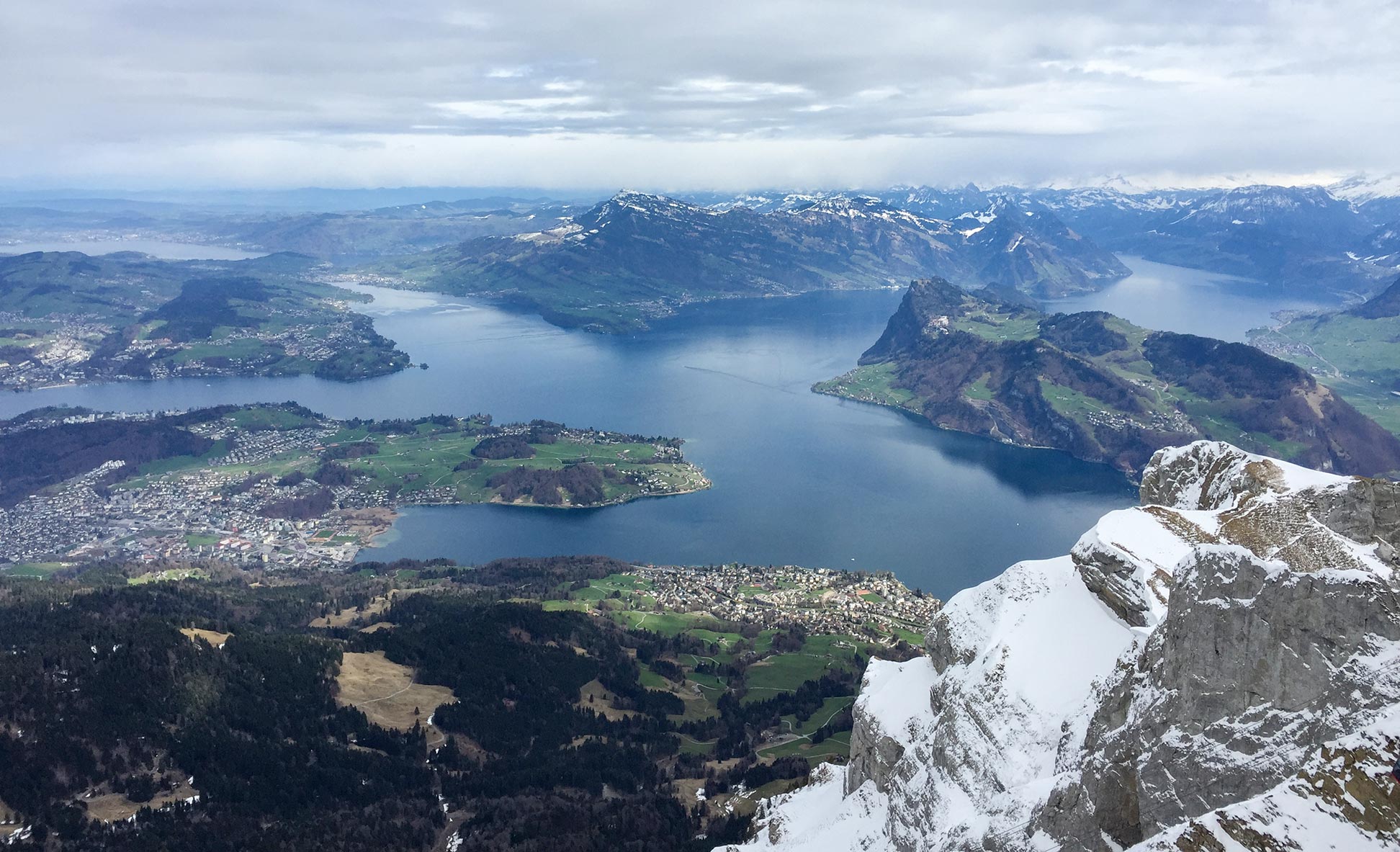 View from Mount Pilatus to Vierwaldstättersee (Lake Lucerne), the region around the lake is the birthplace of Switzerland. In 1291, the Waldstätten (site in a forest) of Uri, Schwyz and Unterwalden founded the Old Swiss Confederacy.
Image: Cyril Senn 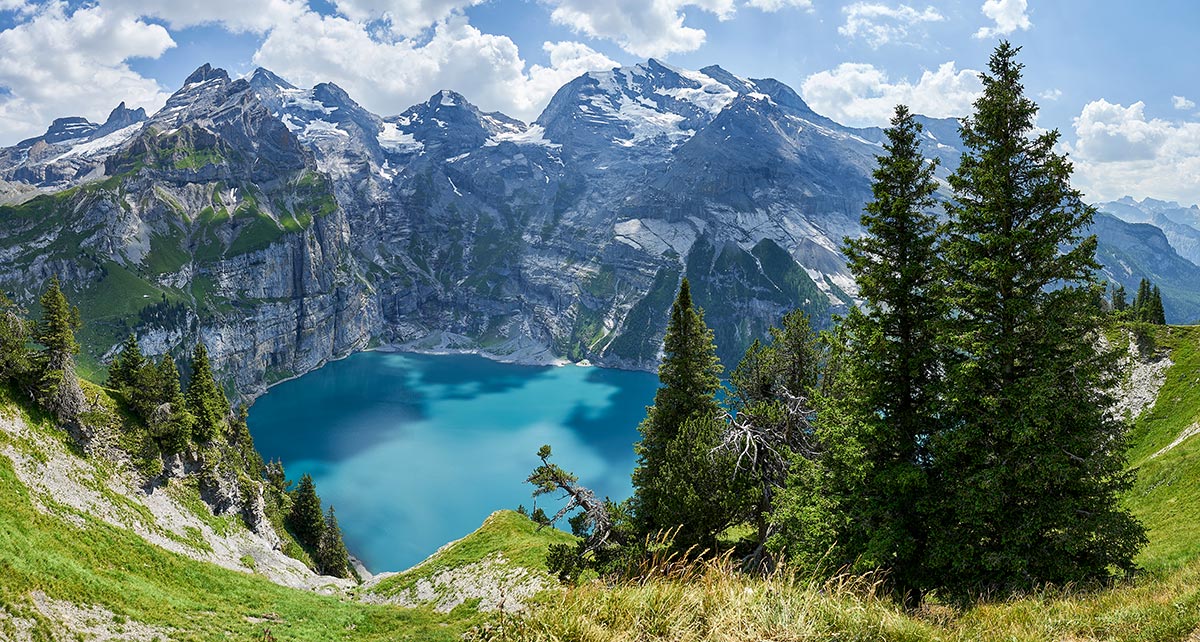 View from the Heuberg to the Oeschinensee (lake) with Blüemlisalp, Fründenhorn and Doldenhorn. The lake is located in the Bernese Oberland in the canton of Bern.
Image: © Günter Seggebäing

As diverse as its landscape and the use of languages in the country are the boundaries of Switzerland's administrative regions.

There are the Urkantons, formerly known as Waldstätte (forested site/settlement), the early confederate allies of Uri, Schwyz and Unterwalden in Central Switzerland; the core of what later became Switzerland.

Today, there are the (main) cantons (states), but they can have exclaves or enclaves or both. Three cantons are divided into half-cantons, although "half" is not an exact value.

Zürich (ZH)
Named after the canton capital Zurich (Stadt Zürich), Switzerland's largest city and a global center for banking and finance is located at the northern end of Lake Zurich.
With more than 1.5 million people, the canton of Zurich is the most populous in the country.
The spoken language is German; the German spoken in the German-speaking part of Switzerland is a variant/dialect of German known as Swiss German.
Zürich Tourismus
Kanton Zürich 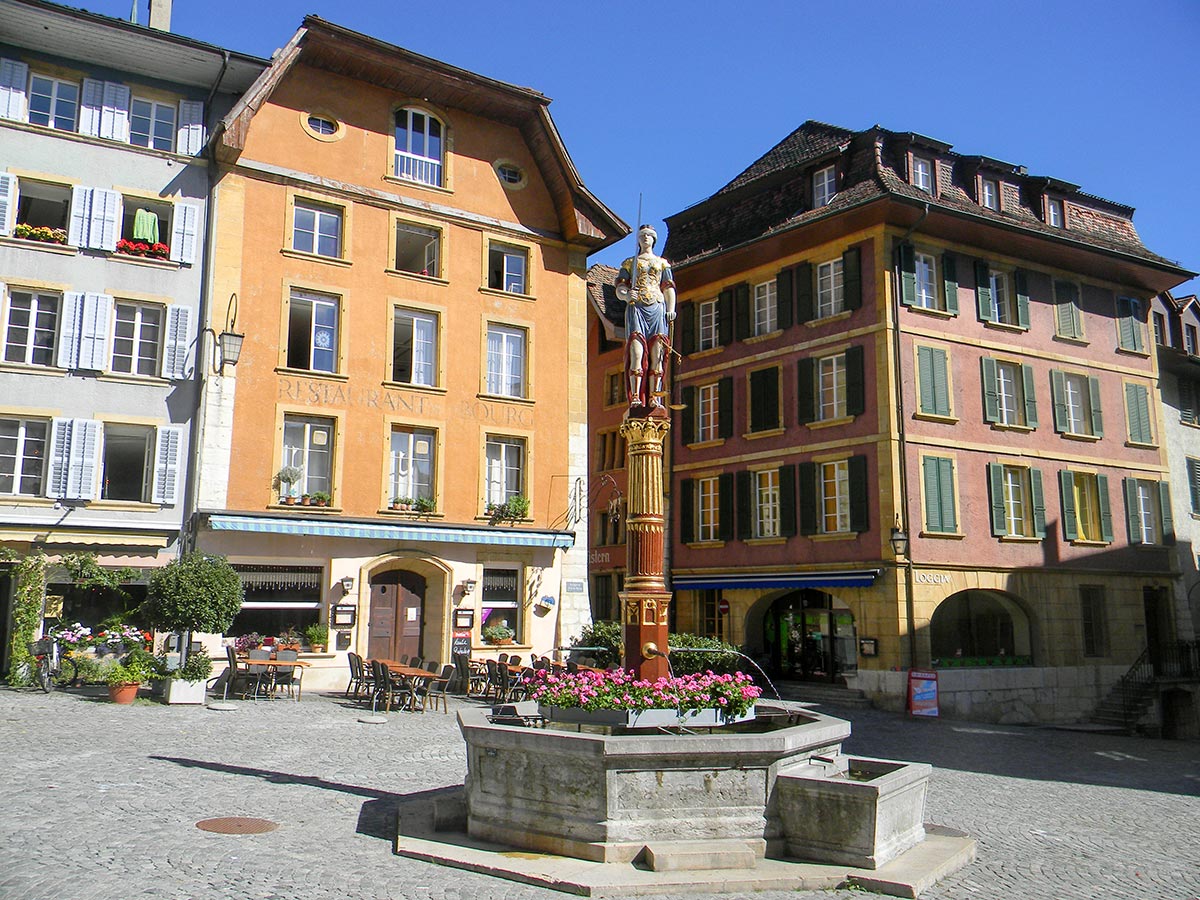 The Old Town of Biel/Bienne, a city at the northeastern end of Lake Biel in the canton of Bern.
Image: kk. nationsonline.org

Bern / Berne (BE)
The Canton of Bern is named after Bern/Berne, the capital city of Switzerland. The second-largest Swiss canton is also the second most populous.
Spoken languages are German (86%) and French (11%).
Bern Tourism
Canton of Bern


Luzern (LU)
Named after the canton capital Luzern (eng.: Lucerne). Lucerne is a canton in the center of Switzerland, bordering Lake Lucerne (Vierwaldstaettersee) in the southeast. The canton is home to the UNESCO Biosphäre Entlebuch, a protected mountain area of moorland and limestone caves.
The The administrative language is German.
Lucerne-Lake Lucerne
Kanton Luzern


Uri (UR)
The canton Uri is a founding member of the Swiss Confederation. Capital city is Altdorf.
The administrative language is German.
Kanton Uri


Schwyz (SZ)
Schwyz is a founding member of the Swiss Confederation. The name of Switzerland is derived from the name of the canton. The capital city is Schwyz.
The administrative language is German.
Kanton Schwyz


Unterwalden was a canton in central Switzerland, south of Lake Lucerne; it was a founding member of the Swiss Confederation. The canton was divided into two half-cantons: Obwalden (OW) with the capital Sarnen and Nidwalden (NW) with its capital Stans. The administrative language is German.
Kanton Obwalden
Kanton Nidwalden


Glarus (GL)
Glarus or Glaris is a canton in east central Switzerland. The canton is named after the capital Glarus.
The administrative language is German; the spoken language is Alemannic German.
Kanton Glarus 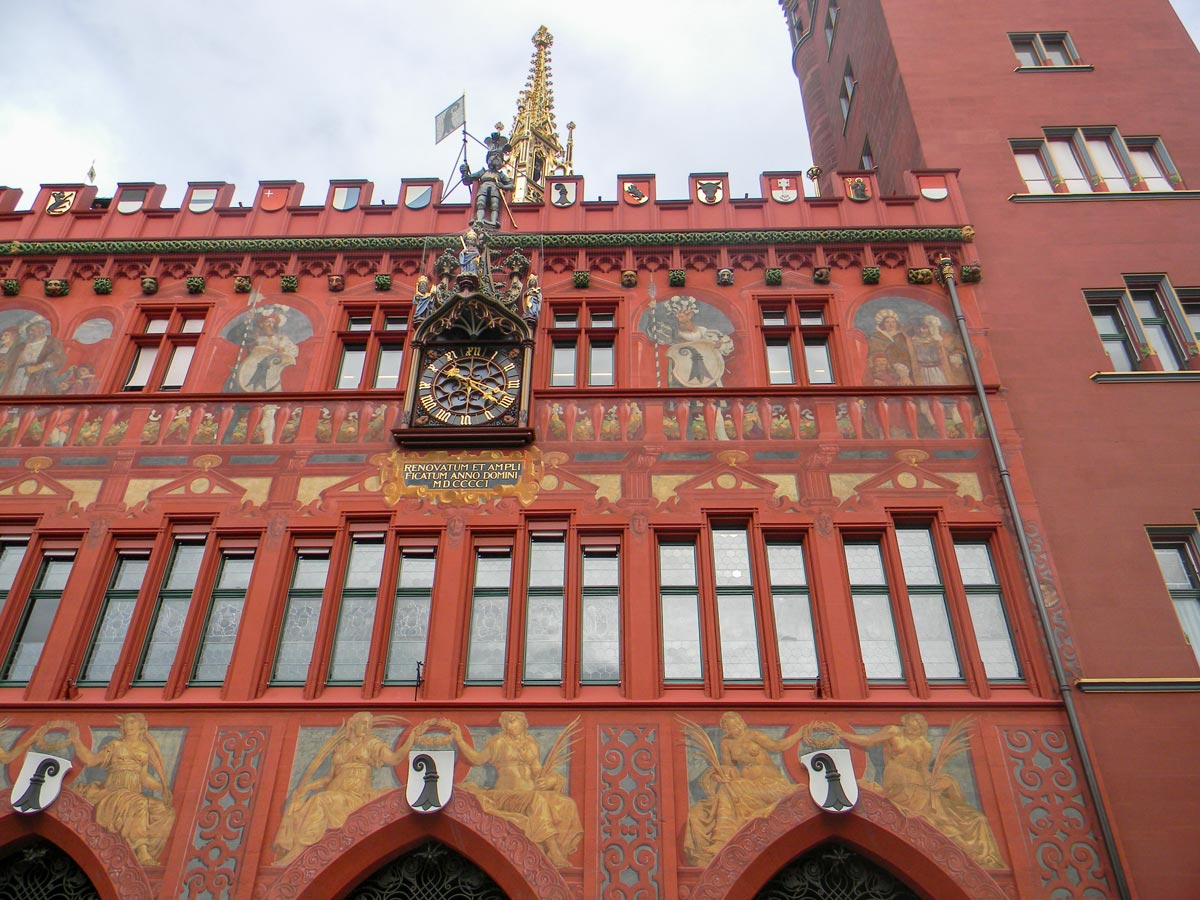 Facade of the Basel City Hall, a 500-year-old building on the Marktplatz (market square) in Basel, the capital of the canton of the same name.
Image: kk. nationsonline.org

Zug (ZG)
Zug is a German-speaking canton in central Switzerland. The capital and largest city is Zug.
Kanton Zug


Freiburg / Fribourg (FR)
Freiburg or Fribourg is a canton (state) in western Switzerland. The canton belongs to both the French-speaking Romandy and the German-speaking region of Switzerland. Canton capital is Fribourg/Freiburg.
The administrative languages are French and German.
Fribourg City
Fribourg Region
Etat de Fribourg


Solothurn (SO)
Solothurn is a canton in German-speaking Switzerland. The administrative center is the city of the same name, Solothurn, while the most populous town is Olten.
Solothurn Tourism


Schaffhausen (SH)
The northernmost canton of Switzerland was a city-state in the Middle Ages. The core of the canton is the city with the same name. On the border between the cantons of Schaffhausen and Zürich is Europe's most powerful waterfall, the Rhine Falls. The population of Schaffhausen speaks Swiss German.
Schaffhauserland Tourismus 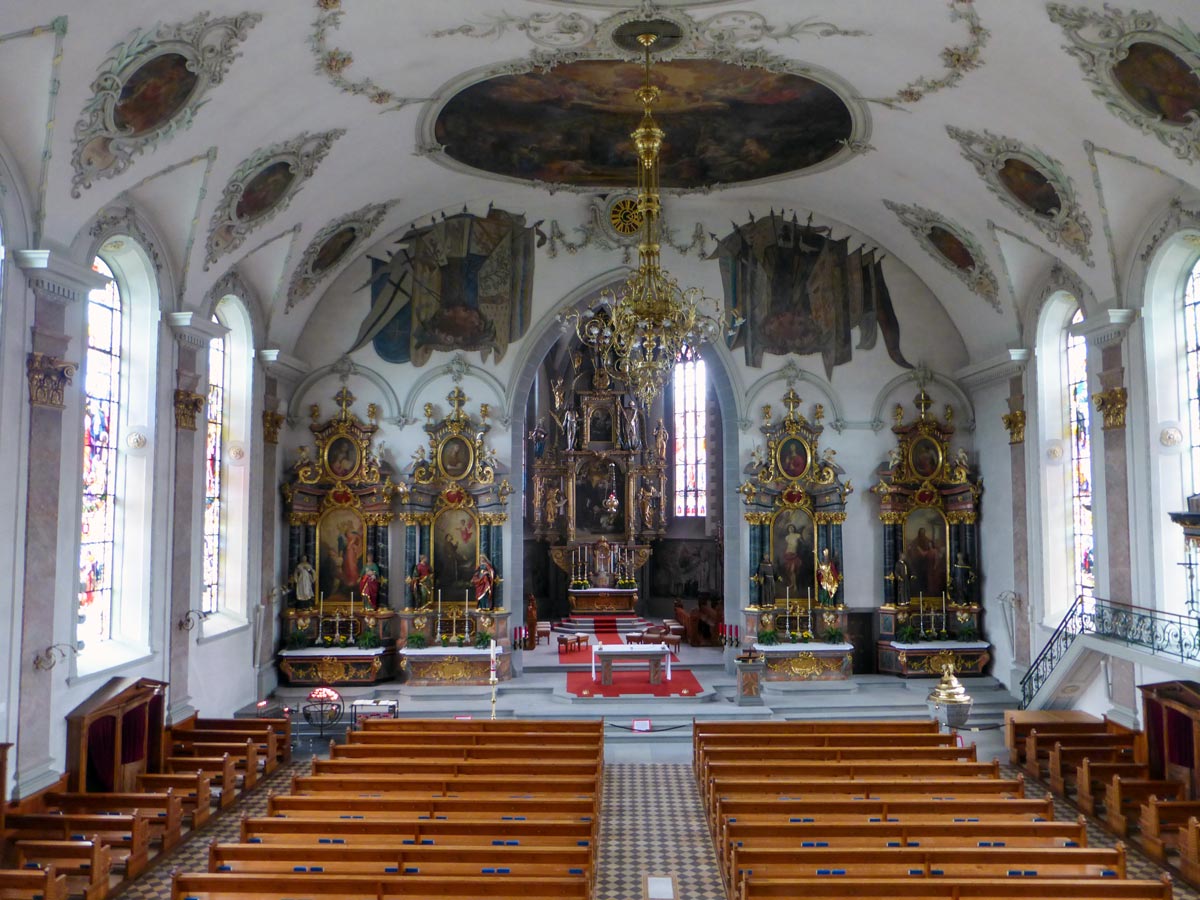 Interior of the St. Mauritius Church in Appenzell, the capital of the half-canton of Appenzell Innerrhoden.
Image: Slightlym


Sankt Gallen (SG)
The eastern Swiss canton of St. Gallen borders Lake Constance to the north and the Austrian state of Vorarlberg and the Principality of Liechtenstein to the east. The main town and the seat of the Parliament of Canton Sankt Gallen (Kantonsrat) is the city of the same name, St. Gallen. Sankt Gallen surrounds the cantons of Appenzell Innerrhoden and Appenzell Ausserrhoden. The administrative language is German.
St.Gallen-Lake Constance region


Graubünden (GR)
Graubünden or Bündnerland or Grisons is a canton in the southeast of Switzerland and is located entirely in the territory of the Alps. It borders Austria in the northeast and Italy in the south. The Grand Council of Grisons, the canton parliament, meets in Chur, the capital of Graubünden. Grisons is home to the famous Alpine resort towns of Davos and St. Moritz. Administrative languages are German, Italian and Romansh.
Graubünden Ferien


Aargau (AG)
Aargau is a canton in northern Switzerland. The Rhine River forms its border with Germany in the north. Aargau is known as one of the most fertile regions in the country. Canton capital is Aarau, a medium-sized city on the Aare River, the longest river that runs entirely within Switzerland. The population speaks mostly German.
Aargau Tourism 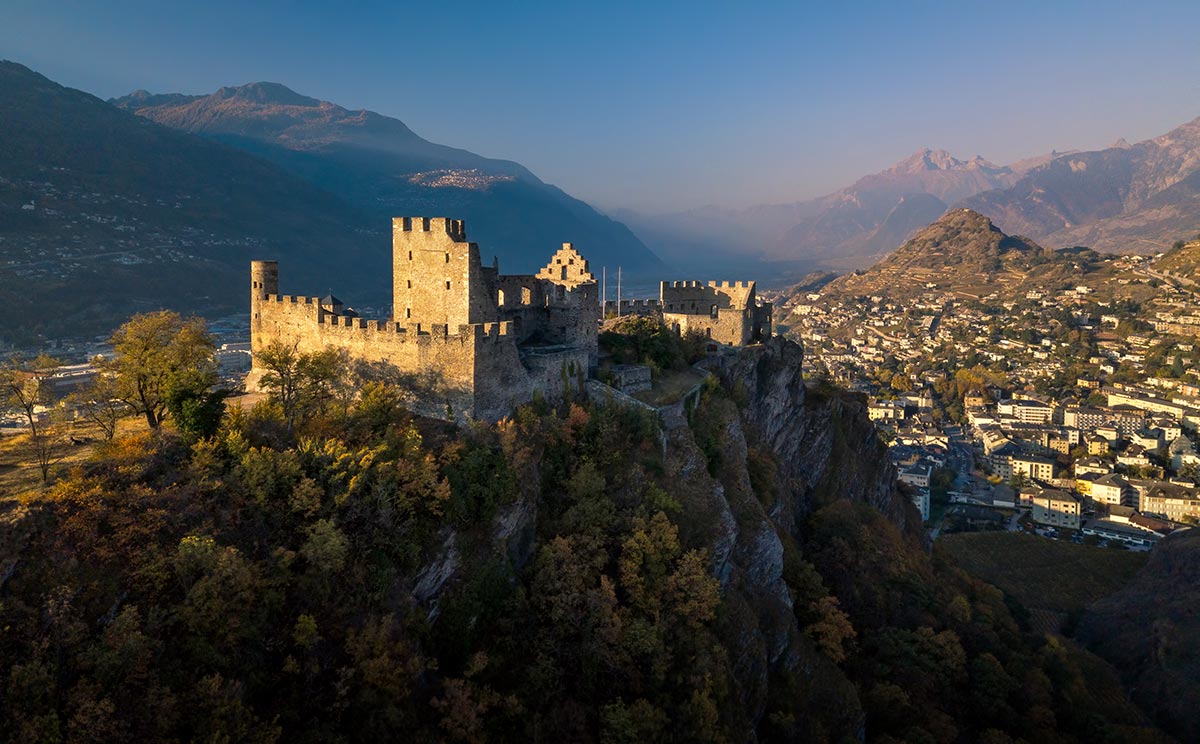 Tourbillon is a ruined castle located on the hill of the same name, northeast of the old town of Sion in the Swiss canton of Valais.
Image: Kateryna Baiduzha

Thurgau (TG)
Thurgau is a German-speaking canton in the northeast of Switzerland. It borders the Rhine River, the Untersee (Lower Lake Constance) and the Lake Constance, and Germany to the north. The capital is Frauenfeld.
Thurgau Tourism


Ticino (TI)
Ticino, also known as Tessin, is located in the south of Switzerland. The canton is famous for its Mediterranean flair. Locarno and Ascona are popular vacation resorts. The capital is Bellinzona; the most populous city is Lugano. Italian and Lombard are spoken in Ticino; the official language is Italian.
Ticino Tourism


Vaud (VD)
Vaud or Waadt is a canton in Romandy, the francophone part of Switzerland. Vaud is located in the west of Switzerland and stretches from Lake Neuchâtel to Lake Geneva. The capital and the most populous municipality is Lausanne. Vaud is home to the Lavaux Vineyard Terraces, a UNESCO World Heritage Site.
Lake Geneva Region Tourist Office
Official website of the Canton of Vaud


Valais / Wallis (VS)
Valais or Wallis is a canton in the southwest of Switzerland. The western part of the canton has a French-speaking population, while the eastern part has a German-speaking population. The Valais is home to the mountaineering and ski resort of Zermatt and the probably most famous mountain in Switzerland, the Matterhorn. The administrative languages are German and French.
Valais Tourism 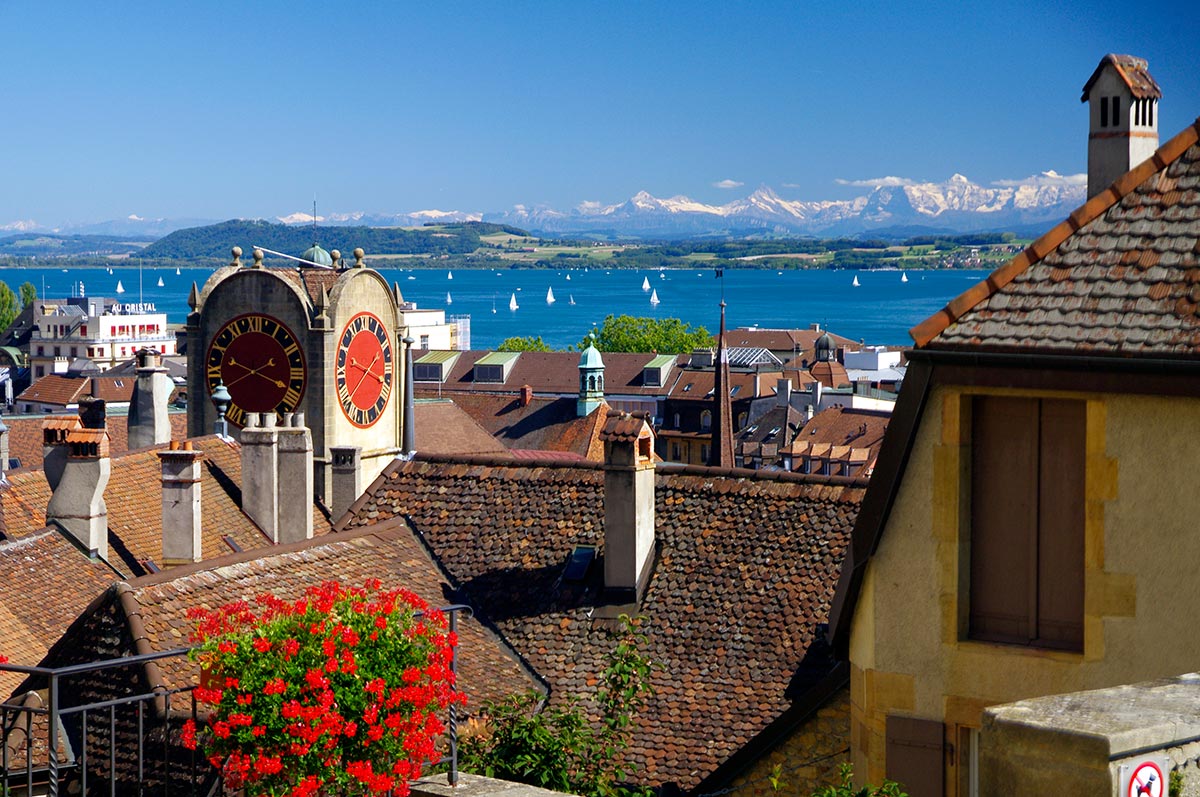 Neuchâtel (NE)
The Republic and Canton of Neuchâtel is a rather rural, French-speaking canton between Lake Neuchâtel and France in the central Jura Mountains in western Switzerland. The capital and most populous town is the eponymous city of Neuchâtel. The canton is home to La Chaux-de-Fonds and Le Locle; the two towns are a center of Swiss watchmaking.
Canton of Neuchâtel
Neuchâtel tourism


Genève (GE)
The Republic and Canton of Geneva lies at the western end of Lake Geneva. The capital, largest city and the seat of the canton government is the City of Geneva. The city is also home to a number of international organizations such as the European headquarters of the United Nations, the World Trade Organization and the International Federation of the Red Cross and Red Crescent Societies.
Visit Geneva
Ville de Genève


Jura (JU)
The Republic and Canton of Jura is located in the rural hilly Jura region in the northwest of Switzerland, on the border with France. It is the youngest Swiss canton, founded in 1979. The capital, largest city and seat of the government, is Delémont (pop.: 12,000). The population speaks mostly French.
Jura Tourism
Official website of the Canton of Jura

Cities:
Information about and a searchable map/satellite views of: